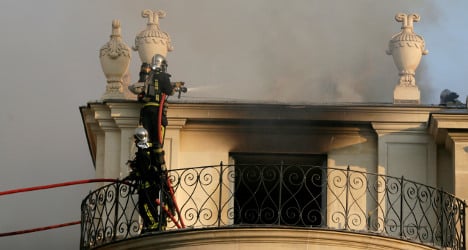 Firefighters try to put out the blaze at Hotel Lambert. Photo: AFP

Sheikh Abdullah bin Khalifa Al Thani said he was determined to follow through with the restoration of the mansion after the fire on Wednesday at the 17th-century townhouse on Ile Saint-Louis overlooking the Seine.

"We are more determined than ever to continue the restoration works… to preserve the beauty of this magnificent example of French architecture," the sheikh said in a letter made public by his notary, Antoine Pineau.

The fire caused significant structural damage to the mansion and destroyed murals, frescoes and paintings dating back centuries.

Police were investigating the cause of the blaze, which broke out on the roof of the building and is believed to be linked to renovation works.

Built in the 1640s at the eastern tip of Ile Saint-Louis, the mansion was designed for a wealthy financier, Nicolas Lambert, by the architect Louis Vau, who went on to oversee an expansion of the Chateau de Versailles for Louis XIV.

The mansion is considered one of the finest examples of mid-17th-century French architecture and has a storied history, having played host to a slew of famous names including philosopher Voltaire.

The sheikh bought the building in 2007 from the Rothschild banking dynasty for some 60 million euros ($85 million).

Plans for large-scale renovations, including the installation of a parking area and vehicle lift, were initially blocked by a French court following complaints from heritage activists and neighbours.

The dispute was finally resolved in early 2010 when an agreement was signed with a heritage association after weeks of delicate government-supervised negotiations.