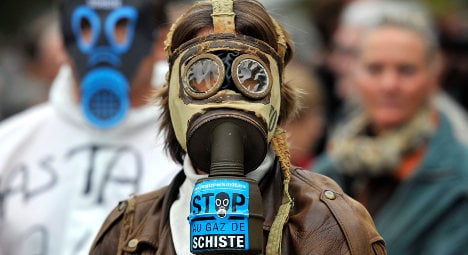 A masked demonstrator during a 2011 protest in France against the fracturing of shale gas. Photo: Gerard Julien/AFP

French Prime Minister Jean-Marc Ayrault moved to defuse a row over whether France should exploit the country's shale gas reserves on Thursday after one of his ministers had reignited the divisive debate.

.Ayrault was forced to step in after an old row over whether to tap France’s wealthy reserves of shale gas was reignited this week and once again revealed the French government to be more fractured than ever. The PM insisted however "there was only one government policy" and that a 2011 ban on the drilling for shale gas would remain in place

His statement came after a claim by the outspoken industry minister Arnaud Montebourg that France should exploit its resources of shale gas in an “environmentally friendly” way.

Montebourg, well known for causing angst among members of his own party and others, said a public company should be set up and that “we could come up with the technology in a very short time to be able to exploit the gas ecologically”.

The subject of shale gas drilling has been a divisive one in recent years due to the fears over the harm done to the environment by the process of extracting the gas, known as fracturing, or "fracking."

On the face of it, however, Montebourg's statement does not appear ridiculous, especially from an economic point of view.

According to the Shale Gas Europe organization, a study by the United States Energy Information Administration, carried out without exploratory drilling, revealed that France has “technically recoverable reserves of 3.8 trillion cubic metres (137 trillion cubic feet)”.

And in the US government’s Energy Information Administration survey of 14 European countries, France was second only to Poland in its level of shale gas deposits. And at time when French industry is in decline, recent estimates that 62,000 new jobs could be created by exploiting shale gas have added weight to the arguments of those in favour.

For the moment, however, the gas looks set to remain exactly where it is, because of the environmental fears.

Despite Hollande appearing to put an end to the matter, the issue remains a hot potato, as seen by the reaction to Montebourg’s proposal this week.

The subject of shale gas fracturing in France was “not up for discussion”, Le Foll told BFMTV. “Can we really imagine hydraulic fracturing in the Drôme near the Vercours region today? The answer is no."

“The government’s position on this matter has already been clearly defined,” he added.

Those most likely to be alarmed by Montebourg’s words are from France’s Green party, (EELV) who are an important group in the Socialist-led coalition government.

The Greens are still smarting from the downfall of their party colleague, former Environment Minister Delphine Batho, who was sacked by President François Hollande last week after she criticized the budget for her department.

Her replacement Philippe Martin was quick to set Montebourg straight.

"There is no question of an environmentally friendly exploitation of shale gas," he said, adding that the impact of shale gas drilling is "very negative."

Perhaps more free to speak out, Jean-Vincent Place, the president of the Greens in the Senate said “Montebourg is a provocateur, who should have gone during the crisis at Florange. He is perhaps useful to the president and to the balance of the Socialist Party but he is harmful for the environment.”

Despite Montebourg apparently being put in his place, the issue of fracturing for shale gas is unlikely to go away given the wealth of resources and ongoing developments in technology.

A recent report from France’s Parliamentary Office for the Evaluation of Scientific and Technological Choices (OPECST) gave support to those who share Montebourg’s view by endorsing shale gas exploration, highlighting that the technique has already been used in France at least 45 times without any harmful consequences to the environment.