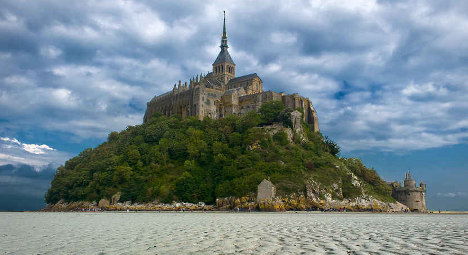 Mont St Michel one of France's remained closed for a strike on Wednesday as the Tour de France came to town. Photo: Guiseppe Citino

Thousands of people descended on the famous island abbey of Mont-St-Michel in Brittany on Wednesday as the Tour-de-France peloton rode into town.

And with the summer tourist season in full swing the world heritage site would have enjoyed one of its busiest days in recent history.

But unfortunately the abbey remained closed on Wednesday, just as has done for the last two days because of a staff walk-out.

The dispute which centres around staff transport from the mainland to the island is into its 40th day.

Last year authorities changed the transport system at the site to protect the environment around the island . A new car park was built 2.5 km and shuttle bus system installed to ferry the thousands of tourists, who visit the site each day, to the island as well as the 600 or people who ply their trade there.

But staff are not happy at the fact their journey time to work is now longer and want a return of a shuttle service dedicated just for them.

“With this new system, the average travel time of employees has been doubled,” said restaurant owner Serge Poisson from the CGT union.

“These days it takes me 40 minutes to reach my restaurant, whereas before it took me ten minutes.”

The strike and the workers demands have infuriated the company that manages Mont-St-Michel, CMN.

“They are unacceptable,” said Philippe Belaval, president of CMN. “This is the time of the Tour de France.”

During the 40 day dispute the abbey has managed to stay open and visitors have not had to pay the usual €9 euro entry charge.

That has meant good news for tourists but bad news for the already empty French coffers as it has lost out on hundreds of thousands of euros.

However a united walk-out since Monday has left management no choice but to close the abbey.

“People are justifiably disappointed. They come from hundreds of kilometres away and from abroad to visit this monument,” an official at the tourist information office told Le Figaro.