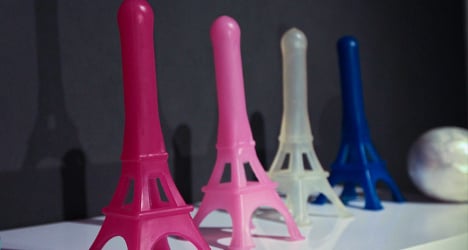 The ‘Plaisir de France’ co-op was launched in recent weeks with the aim of breaking the monopoly of major sex toy producers whose products are made en masse in China, before being distributed throughout the world.

“We all know about Chinese, American, German sex toy makers. The goal of Plaisir de France is to raise awareness of the talents of French sex toy producers,” Lecca told The Local on Wednesday.

In order to boost business for its members, the association is intended to pool resources and experience on some of the practical roadblocks that sex toy makers can face.

The rubber sex toy's website prides itself on offering a “monumental sensation”, as well as being hypoallegenic and made entirely in France. “I chose the Eiffel Tower to begin with, because it’s so famous, and also well known for having a phallic shape.”

But Lecca does not want to restrict himself to France and its most famous monument. He has a desire to sex up some of the world's most famous landmarks.

“I’d love to do a sex toy of the Statue of Liberty, the Empire State Building, the pyramids Pyramids and Big Ben” he added.

'The French are way behind the British'

“Making a sex toy mould costs twice as much in France as it does in China,” he told French daily 20 Minutes.

Despite their reputation as great lovers, the French have a lot of catching up to do when it comes to their indulgence in the odd naughty game, it would seem.

“The French are way behind other European countries, especially the British,” said Lecca.

“The problem is primarily educational. We want to open up the French people to the joys of lingerie, sex toys, massage oils, fantasy, and games,” he added.

According to a 2010 survey for the Sexyprivé website, 22 percent of French men and women claimed to have bought a sex toy in the last year, a further 36 percent however said they’d be interested in acquiring one.

That’s a potential market that Plaisir de France and its members will be hoping to tap into over the coming years, in an effort to encourage growth in the French economy, as it were.