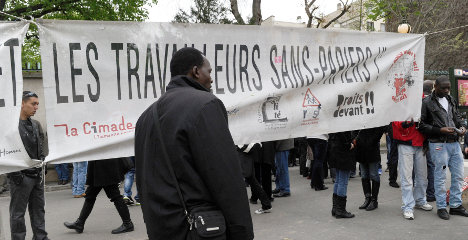 A protest by illegal immigrant workers in France in 2011. Photo: Pierre Verdy / AFP

Last year a total 36 822 illegal immigrants were deported from France –  the highest figures ever recorded and a steep rise of 11.9 percent compared to 2011.

The data which has not been confirmed officially was revealed by French daily Liberation and backed by Interior Ministry sources quoted by other French news outlets.

According to Liberation most of the expulsions took place in the first half of 2012 when Nicolas Sarkozy and his right wing UMP party were still in power.

Despite setting a record the figure of 36, 822 is still below the target set by former UMP Interior Minister Claude Gueant, who had set an objective of 40,000 deportations if Sarkozy had been re-elected.

Christophe Daadouche, from French immigrant support group Gisti told The Local that France needed to change its policy on immigration.

“These figures are not that surprising. Even with a new government the mentality is still pretty much the same,” he said. “The policy of deporting illegal immigrants en masse has been in place for a long time, but it is a failed policy.

“The mentality towards immigrants needs to change. People need to stop seeing them only as thieves or bad guys. There needs to be better teaching around the causes of why they come to France in the first place.”

France’s highest court ruled in July last year that illegal immigrants, known as ‘sans papiers’ could no longer be held in police custody simply for not having their residency papers.

The ruling was slammed by the far-right for being “lax, ultra-liberal and pandering to the whims of a European legal oligarchy”.