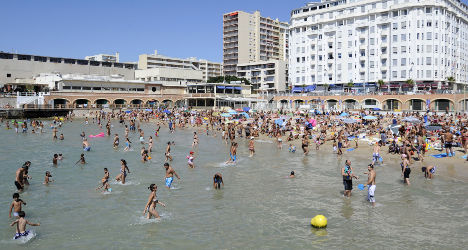 A police officer in Marseille had to be rescued by his partner this week after a mob of youths attacked him on the packed ‘Plage des Catalans’ beach. According to reports, the policeman was beaten before having his head forced under water in an apparent attempt to drown him.

The officer, who had been supervising the popular beach close to Marseille city centre, had confronted the troublemakers after they threatened to attack a young family.

The family's father had confronted them and asked them to stop throwing sand at his girlfriend and her six-week-old baby daughter.

“It’s sad to say, but if it weren’t for that policeman, if he hadn’t taken that beating, it probably would have been us who ended up being drowned,” the 20-year-old mother told regional daily La Provence on Tuesday.

But the 20-strong group then turned their wrath towards the officer, punching him and carrying him into the sea, before repeatedly holding his head under water, in front of a beach filled with families enjoying the first sunny weekday of the school holidays.

Luckily, a second police officer managed to spot the terrifying attack as it was taking place and used tear gas to disperse the gang of youths, causing sunbathers to flee in panic, as captured in the video below.

Most of the group of youths escaped the clutches of the police, but two minors – a boy and girl – were arrested in the aftermath of the incident, police sources told La Provence.

The officer was later taken to hospital.

Local prosecutors have opened a preliminary investigation into attempted murder.

This isn’t the first time that the popular Plage des Catalans in Marseille has been the site of a violent assault.

In August 2010 a 17-year-old girl was raped while swimming there by two 14 and 16-year-old boys, according to La Provence.

This video, captured by La Provence, shows panic on the Plage des Catalans – interspersed with eyewitness accounts in French – after a police officer uses tear gas to rescue his partner from an attempted drowning.