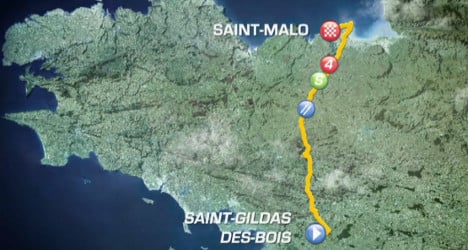 *FOR THE RESULTS AND RACE REPORT FROM STAGE 10 CLICK HERE

After moving up the west coast during Monday's rest day at Saint-Nazaire, riders are set to regroup in the new surroundings of Brittany for Tuesday's Stage 10.

After a gruelling weekend in the Pyrenees and then a much-needed rest day, the 100th Tour de France moves to the northern half of the country for the first time on Tuesday.

The 10th stage is a 197-kilometre largely flat ride from the village of Saint-Gildas-des-Bois north through Brittany to the Channel port city of Saint-Malo, which is hosting the Tour for the ninth time.

On its way, the stage will pass through the small town of Saint-Meen-le-Grand, the birthplace of Louison Bobet, a French cycling great who won the Tour three years in a row during the 1950s.

It will then pass through Calorguen, the home of Bernard Hinault, the five-time Tour winner whose 1985 triumph remains the last by a home rider.

But, apart from paying homage to past greats, and the small matter of one fourth-category climb on the Cote de Dinan, the stage will be a flat one and is set up for a sprint finish.

That means the chase for the green jersey should once again take centre stage, even if the chances of anyone catching Peter Sagan in the points standings already appear forlorn.

The sprinters will be looking to follow in the footsteps of one of the great French speed merchants, Andre Darrigade, who won in Saint-Malo in 1960.

Tuesday's stage, set to take place in the same kind of fine weather that has characterised the entire Tour to date, gets underway at 1050 GMT and is due to arrive at the finish around 1520 GMT.

It will be followed on Wednesday by a 33km individual time-trial between Avranches and Mont-Saint-Michel.