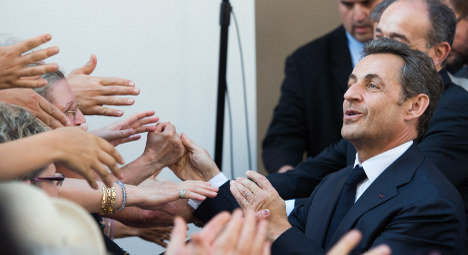 Nicolas Sarkozy reaches out to outstretched hands as he arrives at the UMP headquarters on Monday. Photo: Martin Bureau/AFP

Nicolas Sarkozy was greeted like a saviour on Monday as he made a return to the political spotlight for the first time since his election defeat last year.

With France's opposition UMP party on the brink of bankruptcy Sarkozy was called to a summit meeting, where he spoke in front of around 500 party members and MPs.

As he arrived at the UMP party headquarters, his first appearance there since 2007, the former president was heralded by supporters, obviously keen to see him back him in politics.

As he made his way through the mob of journalists and supporters chanting "Nicolas! Nicolas!"  the atmosphere was more akin to that seen at an election campaign appearance rather than at a crisis meeting as his party stands on the brink.

Sarkozy had been called to the gathering by current UMP party chief François Copé after last week’s confirmation by France's Constitutional Council that the former head of state had breached spending limits in last year’s failed election campaign.

The ruling meant the UMP would not be reimbursed its €11million ( $14million) deposit- almost half of its €23 million ($29.5million) budget for the campaign – as punishment for breaking the rules.

But after Monday’s meeting all the talk was about Sarkozy himself rather than the beleaguered UMP.

Sarkozy spoke to the party faithful behind closed doors but much of his speech was leaked into the public domain, where it was happily devoured by political journalists. A video was also later broadcast on France Television.

“This is not a return to politics,” Sarkozy told the audience. “I do not want to go back in, it is not my wish. The day when I want to, I will let you know,” he said.

The former head of state's Twitter account was also reactivated for the day, through which he tweeted the same message to his thousands of followers.

Sarkozy had warned before his election defeat last year that if he lost “you would not hear from me again.”

However that vow lasted just over a year as he was thrust back into the limelight by the UMP’s crisis.

“I thought it was important enough to break the decision to retire from political life,” he said.

“Who could really think that I would leave you in this situation? The disappearance of this political family would impact well beyond this party. It is a question of pluralism and democracy,” he said.

Those words echoed the statement he made last week on his Facebook page when he appealed for donations from the public to help plug the gaping hole in UMP coffers.

Despite his own denials not many political commentators or indeed politicians believe that Monday was just a fleeting appearance and the combative former president will now return to the international lecture circuit and pick up where he left off.

"From now on we can be absolutely sure that Nicolas Sarkozy will demonstrate that he has found his cure for silence," wrote French daily Le Figaro.

French writer Neila Latrous, who has co-authored two books on the UMP told The Local the French will have to wait until the see the real Sarko comeback.

"When he does make his genuine comeback, and I believe he will, it will be a lot more stage-managed. There will be interviews with TV channels etc. unlike on Monday when he avoided the press and just spoke to the UMP.

"People in the Sarkozy camp say he is more likely to wait until after the municipal elections in 2014. If the UMP do not perform well then he can come back and say 'I am the only one who can lead the party," Latrous said.