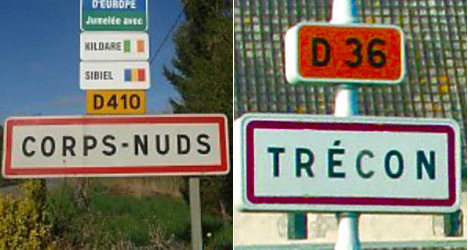 Two villages in France which are proud members of the Association of French villages with funny names.

It includes members like “Dumbass” and “My Nipple” and it meets once a year in France to exchange stories, local products, and generally have a chuckle.

It is of course the association of French communes with funny names or the Association des Communes de France aux Noms Burlesque et Chantants as it is called in French.

For the latest get together held just last weekend, hundreds of officials from bizarrely named towns and villages across France met at Vinsobres (sober wine) in the Rhône Alps region of south east France.

The group has been meeting on an annual basis ever since 2003 and now counts 43 communes among its proud members.

“Our slogan is ‘take advantage of our name to be better known’,” the association’s president Patrick Lasseube told The Local this week.

“We had around 600 officials in Vinsobres and thousands more took part in the demonstration where we show the different products from different communes,” he added.

Although Lasseube insists the association’s main aim to have fun at their own expense, the names of certain villages are proving to be so popular that officials are no longer seeing the funny side.

“The mayor of Poil is getting a bit fed up as people keep stealing the village signs,” Lasseube said. “It is getting to be quite expensive for the mayor now.”

Whereas Poil simply means "hair" in French, "a poil" means "naked". So" tous a poil" can either mean "everyone to [the village of] Poil" or alternatively "everyone naked", which is why the sign keeps being stolen.

However some village names mean they are faced with a different type of problem, Lasseube explains.

“At Corps-Nud (Naked body) people are always taking their clothes off and getting their photo taken next to the sign. It’s funny. It’s a just a joke, but we don’t want anything vulgar, we are totally against vulgarity,” said Lasseube.

Next year the association plans to meet in Mariol (dumbass). Asked if officials would have a bit of fun and respect the name of the village when the event is eventually at Corps Nud, Lasseube refused to commit, rather sensibly saying “It depends what season it is.”