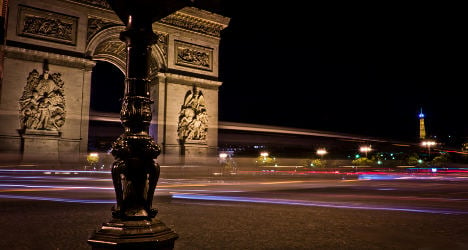 The Arc de Triomphe and Eiffel Tower in Paris, two of the attractions that brought 83 million to France last year, and made it the world's number one tourist destination, again. Photo: Steve Morell

"With a new record number of arrivals by foreign tourists… France in 2012 retained its first place in the world," France's DGCIS international competitiveness agency said in its annual report on tourism.

The figure beat the previous record of 81.4 million foreign visitors in 2011.

"The economic and political problems that are affecting many parts of the world continue to spare the tourism sector," the report said, noting that the number of global tourists was up four percent in 2012.

In France, Europeans continued to make up the bulk of visitors last year, accounting for more than 83 percent of tourists.

The number of European visitors to France was up 2.1 percent last year, the report said, while the number of Asian tourists grew at a rate of 9.9 percent.

The number of visitors from China alone was up 23.3 percent, it said, though they still represented only 1.4 million visitors.

The country that sent the most tourists to France last year was Germany, with 12.2 million visitors.

The number of tourists from the Americas was however down by 3.2 percent, while the number of African visitors was also down, by 2.5 percent.

GALLERY: NEW TOURIST MANUAL SHOWS WHAT THE FRENCH REALLY THINK OF YOU

The news comes at a delicate time for the image of France, in particular Paris, a tourist-friendly destination.

In May, The Local reported how local tourism officials were forced to play down the significance of a riot near the Eiffel Tower and Champs Elysées, during whicha bus full of tourists was attacked by a group of looting football fans.