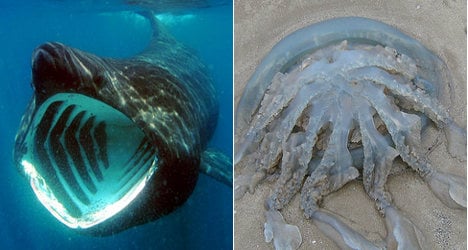 They are up to 12 metres long, weigh about five tonnes, are recognizable by the gaping jaws, and there has been no fewer than 160 sightings of them off the coast of Brittany since the beginning of the year.

No need to worry as it is not great white sharks that are causing a stir in the waters off the western coast of France, which are popular with swimmers and sailors during the summer months, but basking sharks, the world's second biggest fish.

APECS, a French organization dedicated to the study of sharks and rays has described 2013 as “an exceptional year” for the basking shark in Brittany's waters.

On the 6th of June alone a crew of scientists and filmmakers spotted no less than ten sharks off the coast of western Brittany and 30 other sightings were reported on the same day.

The Glénan archipelago off the coast of Finistère “has turned into a highway for the sharks”, Helen Gadenne the president of APECS told Ouest France.

The phenomenon can apparently be explained by the optimal weather conditions of  a very rainy winter which causes and influx of fresh water, accompanied by a large supply of nutrients, to coast areas.

But before fearful tourists start cancelling their summer holidays to Brittany’s popular coastal resorts, there is some good news: basking sharks are harmless to humans as they feed not on bathers and sailors but plankton.

If you do spot one when you are out on a boat trip this summer APECS are asking you to report the sighting on their website.

Meanwhile down on the French Riviera an altogether different sea creature has prompted authorities to take action.

The recent hot weather has seen the return of jelly fish to the waters of the Côte d’Azur which has prompted the Ocean Observatory of Villefranche-sur-Mer to launch a new internet site to help swimmers avoid the creatures.

The site allows users to check on the presence of jelly fish to help them determine which areas of the coast are best avoided. And with jelly fish numbers expected to be higher this year than previously anyone, wanting to take a dip would be well-advised to get online.

The interactive site works by asking users to make a report of where and when they have seen jelly fish.

"In recent years  the numbers of jellyfish have increased in the Mediterranean. Currently, there is however still no systematic observation of these apparitions network," said the website.

"This information [on the website] is fundamental for both swimmers, local authorities, scientists and stakeholders in the marine industry."