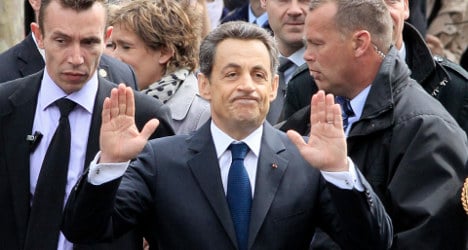 Talk of Sarkozy re-entering the fray of French party politics has been growing for some time. The question of a much-anticipated return to the front line has been more a question of when, rather than if, in recent months.

The former head of state was greeted by dozens of well-wishers as he arrived on Monday at the UMP's Paris headquarters for talks on the party's dire financial situation, but quickly moved to dampen speculation about his return.

"This is not my political comeback. When I retake the floor it will be to speak to the French about France," Sarkozy said on his Twitter account shortly after going in for the talks.

France has been rife with speculation in recent months over the return of Sarkozy, but not many would have predicted the circumstances around which the former head of state returned to the headquarters of his UMP party on Monday for the first time in six years.

After the France's highest court, the constitutional council ruled that the party must forgo an €11-million deposit after Sarkozy breached spending limits in last year’s election campaign, the UMP has been in panic mode.

Faced with crippling debts, the UMP party is on the brink of ruin in eyes of many political commentators in France. Sarkozy, who so far has remained out of the limelight in France, preferring to spend his time and energy on the international lecture circuit, has stepped up to the plate.

After issuing a public appeal for funds on his Facebook page last week, the former president continue to criticize the constitutional council via Twitter.

"Respecting institutions does not mean accepting all of their decisions…. The council's decision creates a serious and unprecedented situation. The question is not that of the UMP, but of pluralism."

Sarkozy said France was suffering a "crisis of political ideas" and that the country needed to move beyond "20th century ideologies".

Party insiders have downplayed talk of a comeback, but UMP supporters are keen to see Sarkozy back in the limelight.

The party has been struggling since Sarkozy's defeat, with leader Jean-Francois Cope and ex-prime minister Francois Fillon embroiled in a bitter public leadership battle that has hurt its reputation.

Sarkozy will attempt to restore some calm when he is set to speak in front of around 800 UMP chiefs and MPs on Monday for a behind closed doors meeting that could decide the future of the party.

“He is the main person involved, its normal that he is at the meeting,” a UMP official told Europe1 radio on Monday.

A  Sarkozy aide told the radio station: “He is responsible for this. He will take responsibility and help the UMP."

The meeting is scheduled for 5pm at the headquarters on Rue Vaugirard. Sarkozy is not expected to make a public speech, but many believe that next stage on his return to the front line of French politics will not be far away.