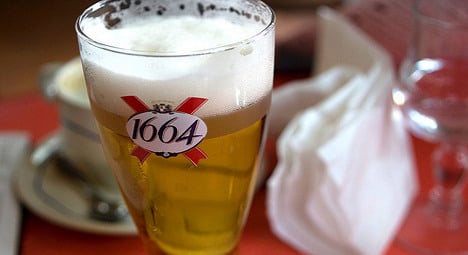 The cost of a cold beer is on the rise in France. Photo: Inmop88a/flickr

When the French government decided to increase the tax on beer by 160 percent in January it was inevitable that consumers would be hit in the pocket.

A cold beer has never been the cheapest of options on the menu in France but after the tax rise punters are paying on average 14 percent more for a "demi" or a "pinte" compared to back in January, according to the organization Brewers of France (Les Brasseurs de France).

The start of summer is supposed to see a boost in trade for brewers but this year they have been left crying into their pints as they reported a 16.4 drop in production of beer destined for hotels and cafes and a 20.5 percent fall fin the production of beer for big supermarkets.

And with prices rising, consumption has been hit, dropping by 15 percent in cafes and restaurants and by four percent in supermarkets in the first three months of the year.

According to the Brewers of France, the tax hike is helping swell state coffers by €810 million a year compared to €330 million previously.

However the tax rise has caused anger beyond France’s borders, with the press in Belgium reporting last month that brewers in the country were ready to launch an official complaint against France with the European Commission.

Brewers in Belgium have accused France of being protectionist and say the rise in tax will have a disastrous impact on jobs.

Outside Scandinavian countries, France taxes beer at one of the highest levels in Europe. But in a country where wine is by far the most popular tipple of choice, the consumption of beer has been in decline for around 30 years. On average the French drink around 30 litres of beer which puts them in 26th place in the European league table of lager guzzlers.