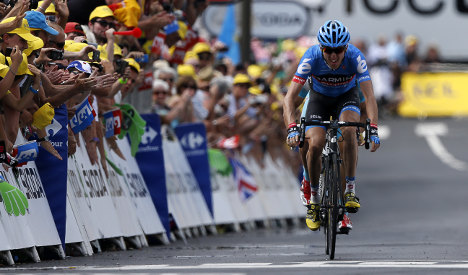 Martin, the nephew of Irish great Stephen Roche, came over the finish with his arms in triumph after beating Dane Jakob Fuglsang (Astana) in a two-up sprint to claim his maiden win on the race.

From sitting second overnight at 51sec adrift, the Australian dropped to the nether regions of the general classification after finishing 17min 59sec in arrears.

Valverde, whose Movistar team were protagonists on the last of the day's five categorised climbs, moved up one place to second to sit 1min 25sec behind Froome, with Spain's two-time winner Contador now sixth but still 1:51 behind.

Froome admitted: "That was one of the hardest days I've ever had on a bike. I was left on my own and it was a pretty difficult position to be in."

After what he termed a "crazy" second day in the Pyrenees, Martin said there had been a concerted effort to shake up proceedings.

Having also won stage nine at the Tour of Spain, the 26-year-old rode out of Bagneres determined. But when Garmin's efforts to get him into a decisive break via waves of early attacks proved futile, he was forced to changed tack.

On the 9.9km climb to the final summit, the Houquette d'Ancizan, an isolated Froome's resolve was tested when little Colombian climber Nairo Quintana (Movistar) produced four separate bursts of acceleration.

The Briton ultimately resisted and, sensing "hesitation" among Froome's rivals to test the race leader further, Martin attacked. Fuglsang followed and the pair crested the summit with a 40sec lead.

They held off the chasers on the 30km descent to the finish, where Martin's burst of speed inside the final few hundred metres proved too much for the Dane.

"I targeted this stage at the start of the race and the whole team gave it everything to get me into a breakaway," said Martin, who is enjoying a breakout season in which he has won the Tour of Catalunya and Liege-Bastogne-Liege.

"It was crazy. We were attacking without thinking about it. Then, when I found myself on the final climb I saw a bit of hesitation in the group of favourites and thought I've got nothing to lose.

"Luckily Jakob came with me and we managed to hold them off. I was confident in the final, I knew I could produce the speed I needed but after such a hard stage you're never sure.

"With 20km to go I hoped I would get caught! I've never had such sore legs."

Frenchman Pierre Rolland explained: "Everyone wanted to give Sky a bit of a fight today. Garmin started the battle right at the start. It was phenomenal. I've never seen a start to a race like it."

Having colluded to shake off Sky one by one, Froome's rivals must now be hoping they can perform a repeat when the race hits the Alps on stage 15.

Valverde was happy with Movistar's efforts in virtually eliminating Porte.

"Today wasn't their (Sky) day. We tried to drop Froome but he proved that he is really strong."

After losing 1:45 to Froome on Saturday, Contador said he is hoping to recharge his batteries on Monday before hitting his peak in the final week.

"Today I felt much better than yesterday. I'm usually strongest in the last week and hopefully that will be the same this year. The race is far from over."

Froome added: "I'm still in the yellow jersey and I've not lost time to any of the other contenders."

But the Briton was stunned when told that teammate Vasili Kiriyienka had missed the stage's cut-off limit and would play no further part.

He added: "That's a huge shame. He's a big engine for our team and we're going to miss him for the rest of the race."