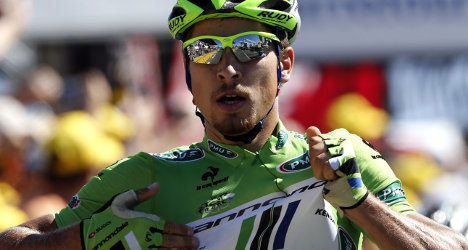 Sagan, last year's winner of the race's green jersey points competition, surged in the final 150 metres of the 205.5km stage from Montpellier to Albi to claim his first win of the 100th edition.

SEE ALSO: THE TEN MOST SPECTACULAR SITES ON THE 2013 TOUR DE FRANCE (IN PICTURES)

It ends a frustrating first week for Sagan, who despite wearing the green jersey for the race's points competition has narrowly missed out on sprint wins on four occasions.

"The team did an incredible job and I want to thank them all," said Sagan.

"I hope today's win gives an answer to all the fans who had criticised me and the team on the internet. Now the pressure is off."

A day before the eighth stage takes the peloton into the Pyrenees, a combination of the climbs on stage seven and the pace in the peloton proved too much for sprinters Mark Cavendish and Andre Greipel.

Both were dropped in succession on the second of the day's four small climbs, and when the news filtered through to Sagan he put his troops on the front of the main bunch and ordered them to hit full gas.

It left Cavendish and Greipel, who won stages five and six respectively, in a large group of delayed riders which flirted with missing the time cut-off limit.

They eventually came over the finish line nearly 15 minutes in arrears.

A six-man breakaway had broken free early as the peloton rolled out of Montpellier but only German veteran Jens Voigt (RadioShack) and Frenchman Blel Kadri (ALM) managed to stay out at the front.

They built a maximum lead of 6min 50sec but as Sagan set his sights on the points from the intermediate sprint, and other riders came to the front to help the chase, the pair were eventually reeled in just after the 114km mark.

Sagan went on to dominate the intermediate sprint at the 135km mark, adding 20 points to his lead in the green jersey points competition.

But soon after, Cannondale were put to work again.

Sitting only 33sec behind Impey in the general classification, Belgian Jan Bakelants spotted a chance to take the yellow jersey for the second time in the race and launched an attack that was followed by Cyril Gautier and Juan Oroz.

The trio surged ahead of the peloton and Impey, with only Orica-GreenEdge teammate Michael Albasini to help him, was in danger of losing the lead.

The South African, however, maintained his composure and sat behind the green-clad team of Cannondale, whose efforts eventually helped close a gap that had never got above the 60-second mark.

Agonisingly for the escapees, their bid ended with just under 4km to race.

In the closing kilometre Argos, whose main sprinter Marcel Kittel was left trailing with Cavendish and Greipel, set up the lead-out train for Degenkolb.

However their timing was flawed. The German sprinter powered to the finish but hit top speed well before the line, leaving Sagan to surge past in triumph and reinforce his grip on the sprinters' top prize.