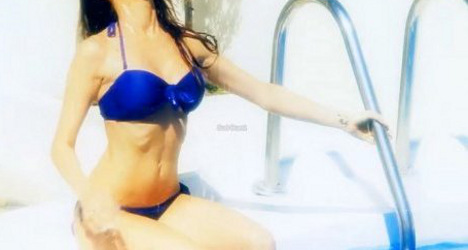 The video was intended to promote the Charente-Maritime region of western France, but has fallen foul of local authorities and tourist chiefs for being "in bad taste"

The video features bikini-clad girls splashing around in swimming pools, wiggling their sun-soaked bodies and holding the occasional provocative pose.

At one point a woman in a gold bikini bends down and shakes her chest towards the camera.

The images for the video, entitled “The anthem of Charente Maritime Summer Edit,” have obviously got pulses racing a little too fast among local officials, and have created a buzz on social media sites.

It is not certain whether Tourism will sanction the use of the video to promote the region.

According to MFL Productions, the company that made the video, the sizzling promo was the idea of regional councillor Michel Servit, but it appears Mr Servit's colleagues had something else in mind.

Dominique Bussereau, who is a deputy for Charente-Maritime and head of the regional council said it was in “bad taste”.

“We hoped to see something else – children by the ocean perhaps, or other images of the region,” said Stéphane Villain, president of the Charente-Maritime Tourist board told Sud Ouest newspaper.

“It might appeal to the young but we cannot have the dancers waddling like that,” added Villain, who said he liked the “music and the general atmosphere of the video but not the images”.

But the creator of the video, Franck Lécole, has hit out at the officials.

“There’s no G-string in sight,” he said. “I work with rappers so I could have brought in some absolute stunners. The ones in the video are almost asexual. They look like little girls at the beach.”

We’ll let you judge for yourselves.