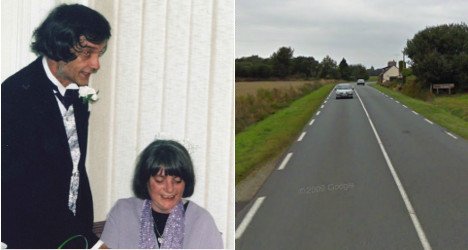 Davis and Susan White on their wedding day (right) THe road near where Mrs White's body was found on Monday. Photo: Linda Johnson/Google Maps

Mr. White was charged by French police with his wife's murder on Thursday, three days after her body was found by the side of the remote road between Guingamp and Tréguier. The 51-year-old had suffered a fractured skull.

The family of Mrs White have spoken of their "shock" at news of her death as well as on being told that her husband had been charged with her murder.

"It is so surreal, this is the kind of thing that happens to other people," Mrs White's sister Linda Johnson told a regional newspaper in Paignton, Devon where Mrs White was originally from.

They also sent a statement to The Local in which they paid tribute to Mrs White, who they described as a "loveable person" with a "good heart", who enjoyed a "happy life in France".

"Susan was a cheerful, loveable person who would help anyone," the statement read.

"Her good heart and nature was often taken advantage of by others but finally we were all so happy that she had found a good and happy life in France.

"She loved her animals and was very proud of growing her own food in her garden. In fact, she even sent us all some seeds one year so we could all grow something. Such a simple gesture which portrayed how happy she was.

"She will be missed by her mother, sisters and by all who knew her."

Mrs White's family said their only hope now is that the truth will emerge as to how she lost her life.

"Susan who could not harm anyone or anything had her life tragically cut short.

"We can only hope that the reality of what happened will surface and if someone is responsible, they are held accountable," the statement said.

On Friday the family also released photos of the couple on their wedding day, before they moved to Brittany around seven years ago.

The sister Linda also spoke of their unease when Mrs White announced she was moving to France with her husband.

"She led a life that we would not have chosen for her but there comes a point in an adult life where you have to respect her wishes," she said.

David White was charged with murder after he was he found to be incoherent in his testimony when questioned by the police, local prosecutor Gerard Zaug told the AFP on Thursday.

Traces of blood have been found near a van belonging to David White, according to investigators.

Mr. White was released on bail but has reportedly been barred by police from returning to the couple's home in the village of Trégonneau. He is believed to be staying with friends.

On Thursday, Mrs. White's family had appealed for any information that could help explain how she died. Her sister told The Local they were desperate to find out what had happened to her.

“This has obviously shocked us all,” her sister Linda Johnson told The Local. “We are just trying to keep things together."

“If there is anyone who might have information on what happened to Susan then please come forward. That’s all we can ask at this moment in time,” she added.

Mrs. White’s body was spotted by passing motorists, who called emergency services. A post-mortem carried out the next day revealed that she had died from a fractured skull, but it could not determine what had caused the head injury.

Reports in the French press claimed her body was covered in bruises.

It is believed Mrs. White moved to Brittany with her husband around ten years ago to begin a new life in France.

“My mother spoke to her just a couple of weeks ago and she seemed absolutely fine,” said her sister.

Mrs. White's auntie, Jeanette Wilton, who also lives in Brittany, was the first to hear about her niece's death.

"One of their friends just phoned me and she said David had asked her to phone me and ask us what we wanted to do about the funeral and that he was in police custody," Mrs. Wilton told The Local.

"The last time I saw her was in March. I remember she really clung to me. I think she was missing her mum and her sisters back home in the UK."

Mrs. White's family now must wait until police release her body before they can organize any funeral arrangements.