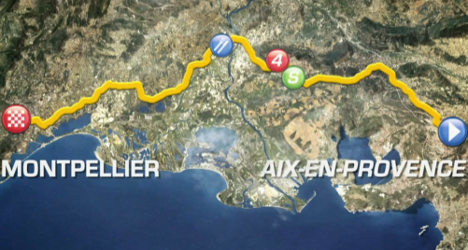 A relatively flat route between tourist haven Aix-en-Provence, through some of the most picturesque landscapes in southern France, and on to Montpellier, should suit the sprinters on stage 6.

The story of the day, however, could end up being Darly Impey, an Orica-GreenEdge rider who only needs to finish eight places ahead of tour-leader Simon Gerrans, to become the first South African in history to wear the yellow jersey.

Before the Pyrenees present the first real test of this year's Tour de France, there should be another chance for the sprinters to impress on Thursday's sixth stage from Aix-en-Provence to Montpellier.

The 176-kilometre ride is shorter than Wednesday's stage into Marseille, and flatter too, with just one category four climb to tackle in the shape of the Col de la Vayede, which comes with more than 100 km still to go.

However, the conditions in southern France could present the sternest test of all. Temperatures are expected to be warmer than in recent days, with the mercury nudging up towards 30 centigrade, while gusting Mistral winds could pose a real challenge.

Alberto Contador may have won the Tour in 2009, but only after losing 41 seconds as he struggled through the unforgiving crosswinds on that year's third stage from Marseille to La Grande-Motte.

While the main riders in the general classification will be striving to keep out of trouble as the winds threaten to blow at up to 70 km an hour, the sprinters will be aiming for more stage glory.

After a slow start to this year's Tour, in part due to a struggle with illness, Mark Cavendish will be hoping to make it two stage wins in as many days in Montpellier after pipping his one-time teammate Edvald Boasson Hagen and last year's green jersey winner Peter Sagan on the line in Marseille on Wednesday.

Cavendish won the last time the Tour came to Montpellier so knows what is required, but plenty of other riders will be desperate to notch a stage win, including the German duo of Andre Greipel and Marcel Kittel.

Kittel, who wore the yellow jersey after winning Saturday's opening stage on Corsica, was hoping to make an impact on Wednesday but was one of numerous riders to go to ground as two mass crashes marred the closing 16 km.

"Thursday will be another chance, the team is looking good and everybody is focused and motivated. So I am really looking forward to that," said Kittel after the finish in Marseille.

The following is an expert video preview of Stage 6 from Global Cycling Network.