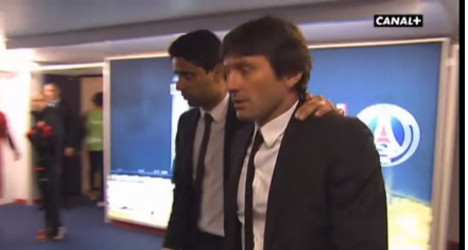 PSG's Leonardo is led away by club president Nasser al-Khelaifi. Photo: Canal Plus

Paris Saint-Germain's sporting director Leonardo on Thursday had his ban for pushing a referee extended from nine months to 13 months, the French Football Federation announced.

The decision to suspend the Brazilian for the entire 2013/2014 season came after an appeal hearing lodged by him against the initial punishment handed down on May 31st.

Leonardo was found guilty of shoving referee Alexandre Castro in the tunnel following PSG's 1-1 Ligue 1 draw against Valenciennes on May 5th, with the incident being caught on camera by Canal Plus television.

PSG had previously described the nine-month suspension as "an unfounded decision and extremely severe". Speaking before Wednesday's hearing the club remained defiant that their director of football did not deserve such a harsh sentence.

"The facts, in our opinion, do not deserve any punishment for the club and the suspension should be reduced for Leo," said Jean-Claude Blanc, the club's lawyer.

Thursday's news will not go down well at the home of the league champions, who are yet to make a statement.

The former AC Milan and Inter Milan coach, having regularly been outspoken in his criticism of match officials throughout the course of last season, was furious at Castro's decision to send off PSG captain Thiago Silva in the first half of the game.

Thursday's increased sanction means Leonardo is banned from all official duties as well as standing on the touchline during PSG games until June 30th, 2014.

If he had not appealed he would have been back on duty in February.

Leonardo was not at Wednesday's appeal hearing. The reason given by the club was that he was busy negotiating the signing of an "important player".