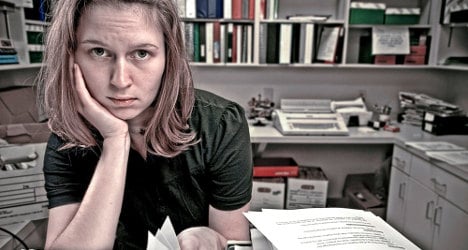 Internships in France. The good and the bad. Photo: Joshua Hoffman

You might be considering studying abroad in France, either as an undergraduate or for a Masters degree. Or you may already be one of the roughly 300,000 foreign students enrolled in university in France.

Maybe your degree requires you to do a six-month 'stage' in order to graduate, or it could be that you're simply looking for you're first job and as is often the case in France, a stage is the only option unless you have experience and even then it may still be your only choice in a stagnant job market.

Either way, with the global economic crisis hurting the employment chances of young people everywhere, and particularly in France, the internship has become a crucial (and controversial) part of the experience for young foreign professionals or students.

With help from Allison Lounes, the American blogger behind the 'Paris Unravelled' website, The Local has put together some of the good and bad points of doing an internship in France – the pitfalls to watch out for, and the benefits to look forward to.

1.   You get 'a salary', of sorts. France is often slated for its bureaucracy and rules but interns should not be too critical because these regulations ensure that you are at least given some pay back for all your hard work and enthusiasm.

The regulations around ‘Stages’ and remunerations are strict in France. The law currently states that the lowest wage should be no less than 30 percent of France’s minimum wage, known as the SMIC. That equates to €436 a month. This won’t give you much of a social life in Paris but you will, at least, be able to afford a baguette each day.

It reality it can be a lottery, but just as you may end up eeking out your food budget on €500 a month, some companies in France actually pay their interns quite generously.

“I’ve heard of people making more than €2,000 a month in their internships,” says Lounes. Which isn’t bad for someone still at university or living at home. According to an article in France's Huffington Post the firms that offer the est best paid internships are normally always in the financial sector with KPMG and Ernst and Young reportedly offering up to €2,300 a month gross. The French bank BNP reportedly offers internships for around €1,300 per month and the Netaxis bank pays around €2,000.

SEE ALSO: Studying in France – Everything you need to know

2.       A chance to travel. Some French internships, especially at large multinational companies like financial institutions and consultancy firms, might allow you to live and work elsewhere in Europe. If you’re the adventurous type, or if you get wanderlust, a 'stage' like this might be an ideal opportunity to work and live in Berlin, for example, while at the same time completing a degree at a French university. Make sure, however, to check out in advance whether you or the employer will be paying your travel and accommodation costs.

3.       It’s practical experience, instead of keeping your head in the books. Depending on your degree, you may be required to do a stage, or you may be able to replace a seminar course with one, for example if you’re doing a research masters. Either way, if you’re keen to get out of the library and into the world of work, an internship in France could be a good way to keep you busy and give you a head start.

4. Its better than the ever-lengthening queue at French job centres. If you are looking for a job but only being offered internships the temptation is too hold out and wait for an opportunity of the kind you believe you deserve. However with offers of internships swamping French job sites it might be easier to take one, keep your brain active and either work your way up to a CDD (temporary contract) which will almost certainly be the best you can hope for, or spend your time at work on the internet looking for a job.

1.       Pay. Whilst most interns are guaranteed the minimum  €436.05 per month, it obviously is not enough to live off and if your internships are less than two months then companies will not even be required to pay you this "minimum wage".  “You’re effectively doing a full-time job, 35 hours a week, and €400 or so is really not a lot each month,” says Lounes. And the law is also clear that should not be referred to as a 'salary' but 'a bonus'. Just so you know.

One reason why most companies will only pay the minimum is that they are exempt from paying taxes and social charges unless the 'bonus' exceeds  €436 a month. For example, The Huffington Post's mathematicians point out that if a student receives a bonus of €600 for a full-time, the employer must pay charges on the €164. So don't be surprised if your pay negotiations don't go too well.

2.       Unscrupulous bosses. Although by law interns aren’t supposed to do the duties of a full-time employee, and their ‘stage’ is designed to be training for them, watch out for employers ready and willing to take advantage of you. “I heard about one American student interning at a bank in France,” says Lounes.

“She would sit around doing nothing all day, then at five o’ clock something urgent would come up. There were times when she didn’t get out of the office until 2am.”

3.       You may not be able to quit or complain. If you’re a foreign student doing, for example, a ‘Masters Professionel’ in France, a six-month stage might be required for you to get your degree. And a positive exit interview is a big part of that, as well as being crucial to your chances of getting hired at the company. “What that means is that you can’t just quit half-way through, or complain about your employer, or tell them to their face that you think they’re taking advantage of you and using you just to make profits,” says Lounes.

4.       You might get squeezed out of the best internships. In France, students or graduates from the Grandes écoles (elite universities such as HEC, ESSEC, Ecole normale supérieure) are given priority when it comes to being accepted on to an internship.

“I have an American friend who was studying at a public university in Lille,” says Lounes. “Students from her school would constantly get passed over for the best internships, and instead they would go to students from the Grandes écoles.”

Which means that, depending on the reputation of your university, and through no fault of your own, you might be left scraping the bottom of the barrel when it comes to internships.

5. Dis-Organised internships. A quick Google search for "internships France" reveals there are plenty of companies offering their services to help set you up with an internship at a French company. However be aware that they may not always be able to deliver what they promise or what you expect as one dissatisfied student who went down this route discovered:

"The disorganization and lack of professional and courteous support while there lead me to avoid talking to them and just doing my own thing, which worked out wonderfully!

"Yes it is true that I was placed in my field of interest, but to be completely honest, my experience in France was awesome because I made it awesome. ******** were very disorganized, the coordinator in Paris was very disorganized and very rude. She was extremely condescending and very unprofessional. So basically, I gave up working or even wanting to talk with ******** people from early on and just took things by the reigns myself."

Allison Lounes is a 26-year-old writer originally from Braintree, Massachussetts who lives in Paris and runs the Paris Unravelled website – "a no-nonsense guide to living and studying independently and on a shoestring."