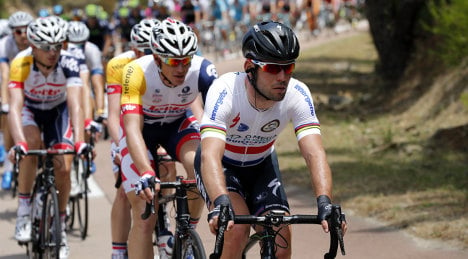 Mark Cavendish at the head of the pack at the 2013 Tour de France. Photo: Joel Saget/AFP

The 213-kilometre ride from Porto-Vecchio to Bastia, the first stage ever to be held on the Mediterranean island of Corsica, was won in a sprint finish by Germany's Marcel Kittel of the Argos-Shimano team.

But his victory became something of a footnote at the end of a chaotic final 20 kilometres as the peloton flew along the narrow roads leading in to Bastia.

The confusion was caused when the bus of the Orica-Green Edge team became stuck under the gantry at the finish line, forcing organisers to propose moving the line forward three kilometres before it was eventually moved into a safe position.

As the peloton approached the finish, they began to up the pace in preparation for the new conclusion to the stage, only to be caught out by the decision to revert to the original plan.

A whole host of riders, including Spain's two-time Tour winner Alberto Contador, last year's green jersey winner Peter Sagan of Slovakia, and former world time trial champion Tony Martin went down in a mass crash six kilometres from the line, with the latter coming off by far the worst.

The German fainted and was later put on a stretcher and taken to hospital in Bastia, fears that he had fractured his shoulder later proving unfounded, leaving his Omega Pharma-Quick Step teammate Mark Cavendish furious.

"What caused the problems was changing the finish," he told reporters. "We heard on the radio with literally five kilometres to go that the sprint was in two kilometres, and then one kilometre later they were like 'No, it's at the original finish.' It's just carnage."

Cavendish had good reason to be unhappy, with the confusion putting paid to his chances of winning the stage and getting his hands on the overall leader's yellow jersey for the first time in his career.

Contador insisted that he would be ok, while Team Sky duo Geraint Thomas and Ian Stannard were declared fit to continue after undergoing tests following their falls, with the British team just happy to see their race favourite Chris Froome come home unscathed.

"Obviously, this was a really unfortunate situation," explained Matt White, the sporting director of the Orica-GreenEdge team at the centre of the controversy.

"The bus was led under the finish gantry, and we took it for granted that there was enough clearance."

"The frantic efforts to clear the bus proved successful, and we had a few minutes notice that the finish line had been moved to its original place."

The team were later fined 2,000 Swiss Francs (US$2,116) by the organisers, who blamed them for their late arrival at the finish and insisted they had made the right decisions.

Despite that, there was widespread criticism from elsewhere, including from Marc Madiot, the manager of French outfit FDJ, who launched a stinging attack on the organisers.

"We can't keep changing the route," he told French television. "Everyone can understand why you might have to change the finish line if there is a problem. There is nothing wrong with that, but here the organisers have not done their job properly."

Kittel was one of the lucky ones who avoided the crash and came through to pip Norway's Alexander Kristoff in a sprint for the line, although all riders were later awarded the same time.

Attention now turns to Sunday's second stage, when more drama could be in the offing as the peloton set off into Corsica's rugged interior for a 156-kilometre ride from Bastia to Ajaccio.

With a series of tricky climbs in the offing, Kittel's yellow jersey is likely to be up for grabs.