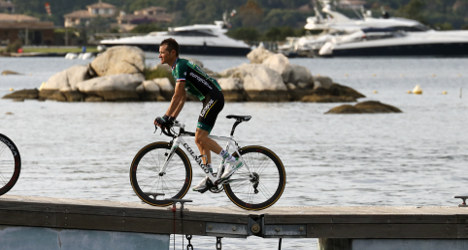 France's Thomas Voeckler rides on a pontoon on his way for the team presentation ceremony on June 27, 2013 in Porto-Vecchio. Photo:Joel Saget/AFP

All eyes will be on the little town of Porto-Vecchio at the southern tip of Mediterranean the island of Corsica on Saturday as it hosts the eagerly awaited Grand Depart of the 2013 Tour de France.

Almost unbelievably given the fact it is the 100Th Tour de France, this year will be the first time that Corsica has ever welcomed the famous peloton.

And as if to make up for lost time the 'Island of Beauty' as it is known is to host the first three stages of this year’s race.

After threats of strikes by ferry workers and fears that Corsica’s notoriously violent underworld might tarnish the island’s big moment the region’s leading politician Paul Giacobbi, who heads the executive council told The Local on Friday, all he can now is hope for the best.

“I’m happy but also a little bit worried because it’s a sort of difficult time before the start. In terms of organisation we hope that everything will be perfect and we are just crossing our fingers,” Giacobbi said. “So far everything has gone fine”.

Corsica’s natural beauty has never been in doubt but an uglier side of life on the island, which has seen dozens of gangland murders in recent years, has stained its image.

Stage three in particular which will hug the spectacular mountainous coastline on the west of the island should be enough to have TV viewers ringing travel agents to book their tickets to Corsica.

Giacobbi says the next three days will go a long way to change people’s impression of the Island.

“It’s a question of our image. We are obviously fed up by the violence. But it is the criminals who are involved in this, not the normal population. We want to demonstrate this to the world.

“We are used to lots of media being here because of the crime but this time it is for a great event.”

The three stages from Port Vecchio to Bastia, Bastia to Ajaccio and finally from Ajaccio to Calvi are designed to showcase the beauty of the island.

Stage three in particular which will hug the spectacular mountainous coastline on the west of the island should be enough to have TV viewers ringing travel agents to book their tickets to Corsica.

And Giacobbi believes the global media coverage given to the race will finally put Corsica on the map, or at least in the right place on the map.

“Over the next three days they will find out and they will see how beautiful and impressive the island is.”

Corsica is not the only reason the 2013 Tour de France promises to memorable. Organisers have designed the route to show off the France’s ‘national treasures’ with no less than 10 UNESCO World Heritage sites along the way.

Some of the Tour’s most legendary mountain climbs will also make an appearance in the 2013 race, most notably the almost mythical Mont Ventoux and the 21 hair bends of the climb up to the Alpe d'Huez. It will all come to a thrilling at dusk on the Champs-Elysées in the City of Light on July 21.

“It is only right that the 100th edition of the race includes some of the mythical spots that have become part of the race’s history,” two time winner Bernard told The Local this week.

The build up to the start of the race has been overshadowed once again by talk of drugs with French cycling legend Laurent Jalabert was forced to step down as a television and radio pundit for the the Tour de France because of doping revelations.

He was accused in a newspaper report on Monday of having taken the banned blood booster erythropoietin (EPO) during the 1998 Tour.

And US drug cheat Lance Armstrong provoked anger on Friday when he said it was impossible to win the race without doping.

After all the talk of violent criminals and drugs cheats both Corsica and the Tour de France could do with a boost in image over the coming days and weeks.

And as for who will win? Well Thevenet says there is a reason why Britain's Chris Froome is the favourite.