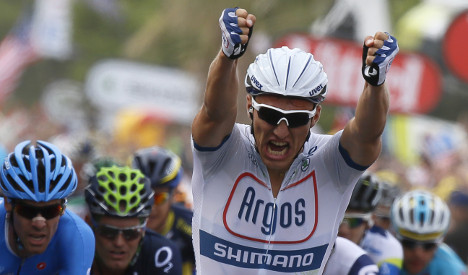 Kittel stole in front of Norwegian rider Alexander Kristoff right on the line to win a Tour stage for the first time in his career, while Danny Van Poppel of the Vacansoleil team came in third as all riders were awarded the same time.

Kittel became the first rider to wear the yellow jersey in the 100th Tour, which continues on Sunday with a 156-kilometre second stage across Corsica from Bastia to Ajaccio.

"I'm speechless, its unbelievable. I'm so, so happy. It's absolutely the greatest day of my life," he told French television at the end of the stage.

"I think I showed that I belong with the best sprinters. The next two stages are not really the perfect profile for me to defend the yellow jersey, but I don't want to think about the next couple of days now. I just want to enjoy this."

For long spells, the first stage ever held on the Mediterranean island was largely uneventful, save for a breakaway by a small group of riders including Spain's Juan Antonio Flecha and Lars Boom of the Netherlands.

But, after the breakaway was reined in by the peloton, there was chaos in a closing 20 kilometres marked by a series of crashes on the narrow roads leading into Bastia and a bizarre incident involving one of the team buses at the finish line.

The bus of the Orica-GreenEdge team got stuck when it hit the gantry over the finish line as the riders approached, leading to suggestions that the line may be brought forward by three kilometres.

The bus was moved out of the way just in time to allow the first stage to conclude as planned, but not before a clutch of riders were hampered by a series of crashes.

Dutch champion Johnny Hoogerland, who famously crashed into a barbed wire fence on the 2011 Tour and was seriously hurt earlier this year after colliding with a car while out training, went to ground after crashing into an advertising banner, in a sign of things to come.

Spain's Alberto Contador, considered by many to be the main challenger to race favourite Chris Froome of Britain, was the highest-profile name to fall on the way into Bastia, as he went to ground in a mass crash that also took out Slovakia's promising sprinter Peter Sagan.

Contador appeared to suffer an injury to his left shoulder, and there will be great concern for his fitness among his Saxo-Tinkoff team.

Meanwhile, Froome came through the finish unscathed, but did suffer an inauspicious start to the day when he fell from his bike and appeared to take a knock to the knee as the peloton paraded through Porto-Vecchio at the start of the opening stage.

He was then forced to change bikes for the remainder of the day's racing.