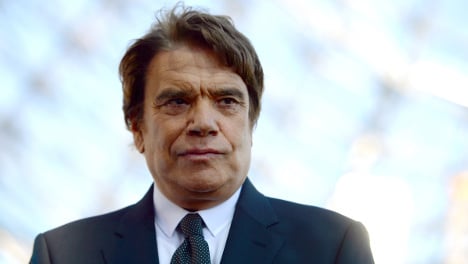 After four days of interrogation in custody, Tapie, 70, was hauled before a magistrate and placed under formal investigation on suspicion of having committed fraud as part of an organised gang.

The charge, which allowed police to use special detention powers normally reserved for suspected terrorists or mafia, relates to a $400-million ($525m) state payout Tapie received in 2008 when Lagarde was France's finance minister.

Lagarde was in charge of the arbitration process that led to the payout and investigators suspect Tapie received preferential treatment in return for his high-profile support for her boss, former President Nicolas Sarkozy.

Tapie's lawyer, Herve Temime, said the charges were completely unfounded and claimed his client was confident he would be completely cleared.

"I can assure you there is nothing in the file that shows the arbitration decision was the result of fraud, or of an organised conspiracy," the lawyer said.

Tapie did not appear after the decision. "He has gone to relax, far away from Paris," his lawyer added.

"We are completely calm about these charges which seem to us to have been decided in advance."

The payout to Tapie related to a dispute between the businessman and partly state-owned bank Credit Lyonnais over his 1993 sale of sportswear group adidas.

Tapie claimed that Credit Lyonnais had defrauded him by intentionally undervaluing adidas at the time of the sale and that the state, as the bank's principal shareholder, should compensate him.

Lagarde was responsible for referring the issue to a three-man arbitration panel, which ruled in Tapie's favour.

Her chief of staff at the time, Stephane Richard, a member of the panel, Pierre Estoup, 86, and Jean-Francois Rocchi, have all been recently charged on the same count as Tapie.

Rocchi is the former president of the CDR, an ad-hoc structure created by the state in 1995 to settle with Credit Lyonnais creditors.

Tapie's lawyer then, Maurice Lantourne, was also hit on Friday with the same charge.

The cash pay-out to Tapie, who served a prison sentence for match-fixing during his time as owner of Marseille football club, was hugely controversial at the time.

Critics said Lagarde should never have taken the risk of the state ending up having to pay compensation to a man who has convictions for fiscal fraud, abuse of company assets and false accounting, as well as match-fixing.

The IMF chief, who inherited the case and the arbitration idea from her predecessor, has defended her decision as the best solution available at the time.

She was questioned for two days in May about her role in the affair and remains what is termed an "assisted witness", which means judges can summon her for further interrogation at any time.

The International Monetary Fund's executive board has repeatedly expressed confidence in Lagarde and said there is no reason for her to step aside from her duties while the corruption case is being investigated.