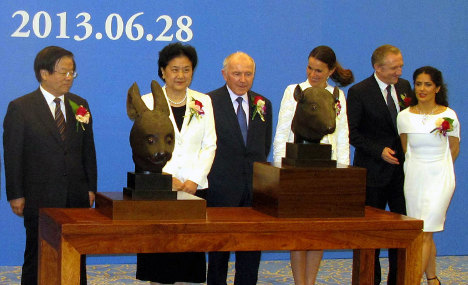 French billionaire Francois-Henri Pinault on Friday handed the bronzes, one of a rabbit and one of a rat, back to China after they were looted from Beijing's Old Summer Palace at the end of the Second Opium War.

The bronzes shot to fame in 2009, when a Chinese bidder offered €14 million for each at an auction, but refused to pay on the grounds that the artifacts were part of the country's national heritage and had been removed illegally.

It was a proud occasion for Chinese patriots, many of whom see the nineteenth century — when foreign powers occupied parts of China by military force — as a period of national humiliation still in need of redress.

China's ruling Communist Party has long gained public support by presenting itself as restoring China's sovereignty and pride following the period, and current President Xi Jinping has appealed to similar sentiments by vowing a "great renaissance of the Chinese nation."

"Cultural inheritance lost in other countries, however big or small their value, we support them to be returned to China," one user of China's Sina Weibo social media service, which is similar to Twitter, said.

"A delight that this cultural inheritance has come back to China," wrote another.

Pinault revealed that he had acquired the two bronzes from Pierre Berge — the partner of late French fashion designer Yves Saint Laurent.

He handed them back to China on Friday in a ceremony at the National Museum of China in Tiananmen Square.

Some said the ceremony at the national museum — which showcases the Communist Party's narrative of national rejuvenation — was not enough to redress past injustices.

"These (bronzes) belonged to us in the first place and of course should be returned. It's embarrassing they held a donation ceremony for it now," another Sina Weibo user wrote.

Others called for the return of hundreds of other relics lost during the nineteenth century, but yet to be recovered by China.

"Welcome to be homed in the National Museum!" one user wrote "What about the others, can you please donate them all to China?"