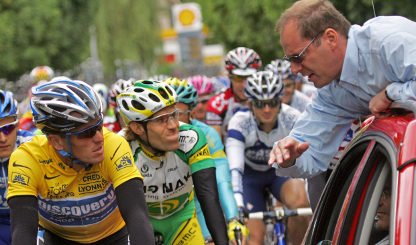 Drug cheat US cyclist Lance Armstrong was once again at the centre of a storm on Friday after telling French daily Le Monde that it was “impossible” to win the Tour de France without taking performance-enhancing drugs.

Armstrong’s claims, published just 24 hours before this year's Grand Départ in Corsica, will now no doubt dominate the build-up to the 100th edition of the race.

“It’s impossible to win the Tour de France without doping because the Tour is an endurance test in which oxygen is a deciding factor,” Armstong said.

“To give an example – EPO ( the banned blood booster erythropoietin) won’t help a sprinter win a 100-metre race, but it will be decisive for a runner doing the 10,000 metres. It’s obvious.”

Armstrong suffered the shame of having his seven Tour de France titles stripped from him after the US anti-doping agency accused him of operating “the most sophisticated, professionalized and successful doping program that sport has ever seen.”

After years of denying he took drugs, Armstrong then made a full-blown confession on the Oprah Winfrey show, where he admitted his sins.

He told Le Monde on Friday, however, that he was just doing what any other normal person would have done.

“I didn’t invent doping. It has always existed and it always will. I just participated in a system. I’m a human being,” he said.

Fed up with Lance Armstrong? CLICK HERE to view our gallery of the most iconic sites on the 2013 Tour de France route

Armstrong’s words come in a week when revelations around drugs have once again smeared the Tour de France.

French cycling legend Laurent Jalabert was forced to step down as a television and radio pundit for the forthcoming Tour de France because of doping revelations.

He was accused in a newspaper report on Monday of having taken the banned blood booster erythropoietin (EPO) during the 1998 Tour.

France’s two-time winner of the Tour de France in the 1970s, Bernard Thevenet, who himself admitted taking drugs, told The Local on Friday that it’s time to stop talking about the past.

“We are always speaking about these things that happened a long time ago, but we need to concentrate on what’s happening now.

“We should be talking about these new young riders instead of looking at the past.”

Another former winner Bernard Hinault also reacted angrily to Armstrong's comments and his claims that there was a doping culture in cycling.

"We've got to stop thinking that all cycle racers are thugs and druggies," he told BFM TV.

"It depresses me to hear all this. I think that when people do exactly what they have to do, in other words, proper testing in all sports, we're going to be rolling around laughing for five minutes.

"Stop saying it's cultural for God's sake. It can't be. There are plenty of young riders who've had dope tests and not tested positive…

"It's constant suspicion," he told the channel from Corsica, where the Tour gets under way on Saturday.