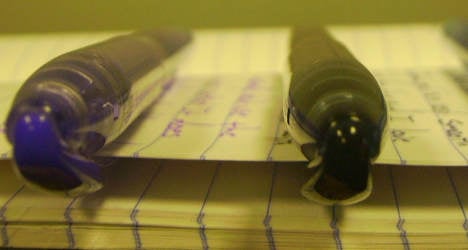 "He needs to be punished from time to time, but that doesn't justifiy humiliation like this!" A teacher near Paris allegedly forced a pupil to put pen caps in his nostrils. Photo: Nrepose/Flickr

The victim, named only as Lucas, was sitting in his class full of nine-year-olds and playing with his pen on Monday afternoon, when his teacher grabbed him by the hand and brought him into a neighbouring classroom, according to French daily Le Parisien.

Sitting Lucas down in front of a group of kids he didn’t know, the teacher allegedly forced him to put pen caps inside both nostrils, an order he reluctantly carried out.

The teacher then reportedly took a snapshot of the boy’s punishment, and threatened to send it to his parents.

Returning home from school in tears, the boy revealed the whole story to his shocked parents, who later confronted the teacher in question.

“I managed to meet with the teacher, to clear up the story, and she confirmed everything Lucas had told us,” his mother told Le Parisien.

“She never once said that she regretted her actions,” she added.

SEE ALSO: The Local’s gallery of the ten most outrageous French teacher scandals in recent months.

It seems, however, that Monday’s shocking punishment is not the first time the teacher has had a run-in with the young pupil, whose parents describe him as “a bit of a rebel.”

The educator has also allegedly taken to calling Lucas ‘Barbie’ in front of his peers, and writing that name on his tests, where he sometimes forgets to fill in his own.

His parents have expressed a reluctance to make things worse by filing a complaint against the teacher, about whom other parents have previously expressed concerns, but local educational authorities have been informed of Monday’s incident and the teacher could soon face punishment of her own.

For his part, Marolles mayor Alain Josse told Le Parisien the teacher’s behaviour was “completely unacceptable,” and that she had “harmed the child, and caused great harm to France’s entire education system.”

The incident comes in the same week another French teacher went before a court in northern France charged with trying to extort €10,000 from the parents of a pupil who had thrown a scrunched up ball of paper at his head.

Monday’s incident is not the first instance of outrageous behaviour by a teacher in France in recent months.

Earlier this month The Local reported that a maths teacher near Paris had allegedly shown a class of 11-year-olds the notoriously ultraviolent horror film ‘Saw.’

And in February, a teacher in northern France was fined and given a two-year ban from teaching, after he was found to have slapped three young pupils while drunk.

Back in January, a substitute pre-school teacher in southern France was accused of tying a three-year-old boy to a chair as punishment, while he cried and asked her to stop.