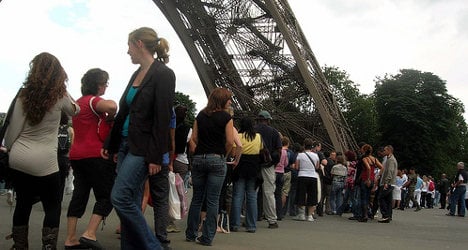 Long queues at the Eiffel Tower were one of the reasons staff went on strike. Photo:Gideon Malias/AFP

Workers at the Iron Lady in Paris were set to return to work on Thursday after staging a two-day walk-out in protest over pay and conditions.

The strike, at the height of the summer season, began on Tuesday morning after talks lasting seven hours failed to lead to an agreement between management and staff at the French capital's most famous landmark.

Thousands of tourists were left frustrated at missing out on a chance to climb the monument, which on a normal day welcomes around 30,000 visitors.

The strike by the 300-odd workers is the first since a two-day shutdown in December 2010.

The tourists, however, may have had some sympathy for the strikers’ cause.

In a statement released on Tuesday, the workers' union CGT explained their motives for the industrial action.

The unions also denounced the management of the ongoing refurbishment programme at the tower and called for more security.

The CGT had also complained that one of the five lifts due to have been renovated following a decision taken in 2008 was still not ready, putting pressure on the employees.

"The Eiffel Tower  is unique in that it relies on the lifts," said the CGT. "In 2008, it was announced that the West elevator would be renovated. Work was suppose to last two years and cost €18 million.

"But after 5 years, it is still not in use and the cost of the work is now close to €40 million."

Despite their frustration at it being closed, tourists might find it hard not to agree with the strikers' gripes.