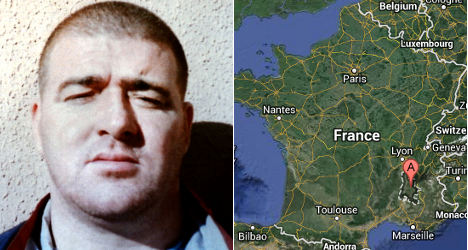 Abdelkarim El Kadaoui is suspected of slaying his wife and three young children after their bodies were found in the village of Saint-Paul-Trois-Châteaux, in the Drôme region of southern France.

The shocking events began on Monday when El Kadaoui's 29-year-old wife Fouzia was discovered in a pool of blood at her mother's house, after being stabbed 47 times, according to a prosecutor in nearby Valence.

French daily Le Parisien reported that she had been living with her mother since the end of last year and feared for her safety at the hands of her husband.

After the shocking discovery of Fouzia's body on Monday, police began a desperate search for the missing three children – a son and two daughters.

But on Tuesday morning their bodies were found by their father's brother in the back of the family car, which had been parked out of sight behind a barn, just 500 metres from where the mother’s body had been found.

According to the same prosecutor, two of the children were suffocated, while marks around the neck suggested the third had been strangled.

El Kadaoui, 43, who works as a bricklayer, is the chief suspect and had been convicted of committing acts of violence against his wife in 2006. The two were due to separate.

Local prosecutor Antoine Paganelli said: “El Kadaoui had told his brother he had made a mistake and said ‘tell mum to forgive me’. From this moment all efforts have been focused on finding the husband."

A witness claims to have seen El Kadaoui in his car at around 1am on Tuesday morning, with the children asleep in the back.

Later that day police sniffer dogs detected a trace that lead into a forested area but the trail was later lost.

Police say substantial resources have been mobilised to track down El Kadaoui, with around 90 officers, three sniffer dogs and a helicopter hunting the suspect.