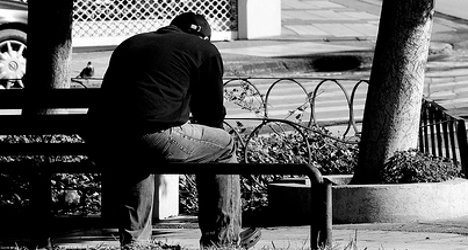 Loneliness on the rise in France. Photo: stavrosxar/flickr

Loneliness is on the march in France and it is no longer an affliction that only blights elderly people, a worrying new survey by the organization Fondation de France revealed on Wednesday.

Since 2010, the last time the survey was carried out, one million more French people are leading solitary lives, with an estimated five million or 12 percent of the nation’s population aged over 18 now living without any social relations through family, friends, work or their community.

Odile de Laurens from the Fondation de France told The Local the modern way of life in France is contributing to the increase in the number of people living in loneliness.

"In the past people lived their lives in the same place in the same circles. These days you have to build your own friends network, your own professional network and you need both to survive. We may have to consider another model that is richer in terms of relationships," she said.

French culture is known for the importance it places on family life, but the survey shows that a loss of family networks has led to 39 percent of French people “not having regular contact with their families”.

"Family ties are becoming weaker and weaker in France and more and more individuals are living alone. We are paying a heavy price for this," de Laurens says. "Its very worrying."

The break-up of longstanding communities is also cited as a reason for the increase in the number of people living lonely lives with 37 percent of French people having little or no contact with their neighbours.

Perhaps the most concerning trend the results of the survey threw up is the increase in the number of young people living in isolation.

Jobless youth left out in the cold

The phenomenon is now common in younger people with the number of under-40s affected having doubled in the last three years.

Those aged 18 to 29 years do not escape the growing trend with around six percent suffering from living solitary lives. Difficulty in finding work, low wages and break down in relationships have been blamed for the rise in loneliness among this age group.

"These people don't have jobs or friends and have little self confidence. We need to help them rebuild relationships," de Laurens said.

One in four over-75s are now living isolated lives compared to 16 percent three years ago. A dangerously high number says de Laurens which can lead to a tragedy like in 2005 when a heat wave left thousands of elderly people dead, because they had no one to check on their well being.

Those living in big cities in France are more likely to be affected, with 13 percent of residents living in large urban areas affected compared to 8 percent in 2010.

And, unsurprisingly, those living on the bread line or without employment were also found to suffer more from loneliness, according to the study.

The survey was carried out by TMO regions, who interviewed a total of 5,000 people across France by telephone.