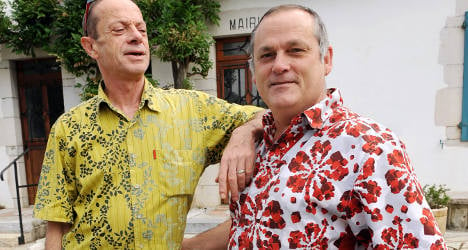 Jean-Michel Colo, the mayor of Arcangues, stirred up controversy by becoming the first French official to formally refuse to officiate at the wedding of gay partners, Jean-Michel Martin and Guy Martineau-Espel, and has made several combative statements.

Isabelle Duguet, the couple's lawyer, said she had filed a case against Colo for discrimination and refusal to carry out his official duties. The 60-year-old has been mayor of Arcangues for three decades.

"For me, marriage is for a woman and man to have children. I am not discriminating, as a same-sex couple is sterile. It's a parody of equality, it's a big lie," Colo had said earlier, defending his stand.

"I will go to the gallows" rather than back down, Colo said.

Interior Minister Manuel Valls has warned Colo of "significant sanctions", telling reporters that any public servants refusing to respect the letter of the law would be guilty of discrimination and thus risk up to three years in prison, as well as paying €45,000 in damages.

The frustrated Martin had told AFP that the couple had even tried to tell Colo that the nuptials would not be played out in the media but he had failed to persuade him to marry them.

"Our initial aim was to create the least waves possible, without any publicity or media presence," Martin said.

"To respect his beliefs, we even told him that we were ready to get married not in the town hall but in our home in the presence of a magistrate but he refused this too."

"It is now time to turn to the law," said Martineau-Espel. "We had been ready to make concessions earlier, now we want the marriage to be held at the town hall."

Colo is far from the only French mayor to have refused to officiate at the wedding of a gay couple.

On Wednesday Jean-Yves Clouet, the mayor of the small town of Mesanger in northwestern France, has also voiced his defiance, saying: "I have my convictions and I will not carry out these kind of marriages, that's for sure."

Earlier in June, Claude Binaud, six-time mayor of Matha, a town in the Charente-Maritime region of south-western France, caused a stir by refusing to marry a local man, Bernard Rouhaud, and his partner.

Binaud qualified his refusal, however, by saying that he "would consider marrying two girls.”

“Two girls, I might have said yes, if my back was against the wall. But that’s totally different, they can have children,” he said.

In April, France became the 14th country to legalise same-sex marriage after President Francois Hollande, who had made the issue a major electoral plank, signed the measure into law following months of bitter political debate.

The first gay marriage in France was held on May 29th.