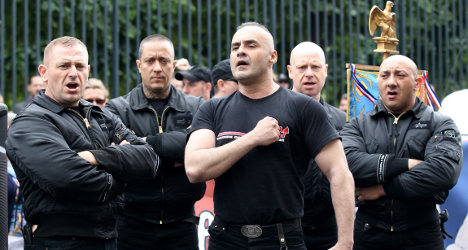 Claiming that “the government has no reason to break us up,” Ayoub added that he himself had dissolved the group, which was founded by neo-fascists and skinheads in 1985, “so as not to be disbanded by others.”

For his part, Alexandre Gabriac, leader of the Jeunesses Nationalistes Revolutionnaires (Revolutionary Nationalist Youth, JNR), said he too was disbanding the small group, whose members were considered to be the more combative “forces of order”, providing protection for Troisième Voie.

He vowed, however, to “continue to act” and said the group’s dissolution would not “stop nationalism from expressing itself.”

French Prime Minister Jean-Marc Ayrault announced a fortnight ago that three right-wing extremist groups would be broken up by July, after sympathisers from Troisième Voie were implicated in the fatal attack on 18-year-old anti-fascist activist Clément Méric in Paris on June 5th.

Along with Third Way and JNR, the third group targeted by the French government is L’Oeuvre Française, a far-right anti-semitic organization founded in the late 1960s and currently led by Yvan Benedetti, who is a regional councillor, in Lyon.

Both Gabriac and Benedetti were banned from Marine Le Pen’s far-right National Front party in 2011.

As the confrontation escalated, Meric was punched unconscious. He was pronounced brain dead in hospital and died the following day. It emerged this week that the fight had been caught on CCTV.

Morillo is likely to face manslaughter charges after police sources say he had admitted throwing a punch but insists he did not mean to kill the student.

Despite consistent denials from Ayoub and Gabriac that their groups were responsible or involved in Meric’s death, Morillo has been revealed to be a JNR and Troisième Voie sympathiser, and French Interior Minister Manuel Valls vowed he would be “merciless” in cracking down on the groups.