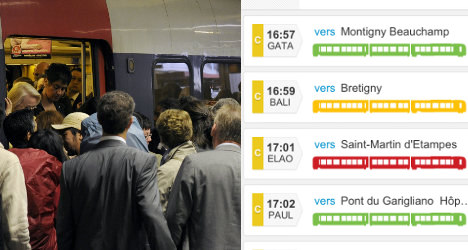 An end to waiting? New smartphone app 'Tranquilien' gives Parisian users real-time info on how packed their next train will be. Photo: Bertrand Guay/AFP

Paris metro trains might come once every three minutes on some lines, but what use is that if, if s often the case during rush hour, every one of them is packed to the hilt?

If only there were a way for stressed out, oxygen-deprived commuters in and around the French capital to know what kind of human traffic to expect, so they could perfectly time their rush from their beds or offices to the train.

The app allows train travellers to type in the station they’re leaving from and arriving at, shows them a list of the next journeys, and uses a three-colour code to tell them how likely it is they’ll be able to stretch their legs on the way home, and in which carriage of the train.

Yellow indicates light traffic, green is average, and red means “this train is packed with people, finish sending your emails at the office first,” as this screenshot demonstrates.

According to the designers, Snips, Tranquilien uses "origin-destination surveys, macro-economical data, points of interests, demographic data" to make its predictions about passenger loads.

Although only available on the iPhone for now, an Android version should be up and running by the end of the year, according to French daily Le Parisien.