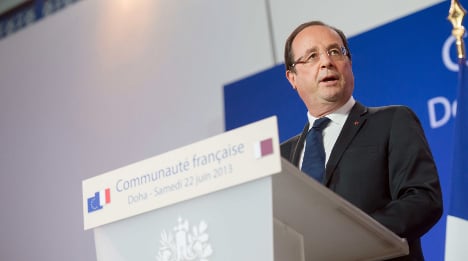 His comments came after Al-Qaeda's north African branch said in a statement Saturday that eight European hostages it is holding are alive and well, promising to release a new video of the five Frenchmen among them.

"We are always seeking contacts, we have every reason to think that the hostages are alive but we must try to free them," Hollande said during a visit to Qatar.

Hollande added that the situation was "unbearable" for the relatives of the hostages, who have been held for 1,000 days, but said that "while there is this anxiety, there is this will to free them".

He stressed the need to do so through reliable contacts, and "not with intermediaries who put themselves forward and who we know have only come looking for benefits for themselves".

The French president also explained his government's silence on the hostages.

"I do not have to give updates on the hostages because, first of all, I know what it means to the families (of the hostages) and I do not want to give them false hopes or, on the other hand, signs which would be discouraging."

On Saturday, demonstrations were held in several towns and cities in France in a show of support for four of the French hostages who have been held by Al-Qaeda in the Islamic Maghreb (AQIM) for 1,000 days.

Francoise Larribe, wife of Daniel, was also captured but was released in 2011.

The fifth French hostage, Serge Lazarevic, was kidnapped in November 2011 in northeast Mali.

In April, President Francois Hollande said France would not buckle under pressure to pay ransom for hostages, saying that by applying discreet measures in such situations, France could handle them more efficiently.