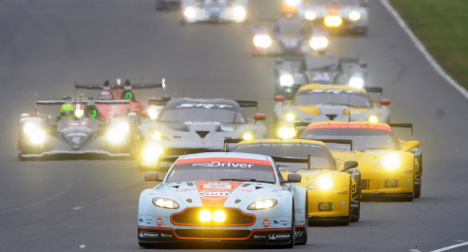 Allan Simonsen takes the start in his Aston Martin prior to his fatal crash. Photo: Jean Francois Monier/AFP

The 34-year-old, competing in the mythic race for the seventh time, spun off on the third lap into the safety barriers at the ultra-quick Tertre Rouge bend, demolishing his car.

Le Mans organisers The Automobile Club de l'Ouest issued a statement reporting that emergency services were immediately at the scene to attend the stricken driver.

It continued: "In a serious condition, Allan Simonsen was transferred immediately to the Circuit Medical Centre where he died soon after due to his injuries.

"The Automobile Club de l'Ouest wishes to express its great sadness following this incident, and extends its deepest condolences to the family and those close to Allan Simonsen."

Simonsen crashed barely ten minutes after the start of the 81st edition of the showpiece endurance event with rain and wind combining to make testing conditions at the Sarthe circuit.

The race was stopped the race for an hour, the time required to remove debris from the track and repair the safety barrier.

The father of one, driving an Aston Martin V8 Vantage, was competing in the GTE-Am category.

His team mates in the No.95 car were his fellow countrymen, Christoffer Nygaard and Kristian Poulsen. Two days ago they had been celebrating taking pole position.

The McLaren driver posting on Twitter: "Allan Simonsen RIP.such a tragic loss. A true fighter & a true racer. Safety is something we need 2 improve on in Motorsport."

Simonsen was the first driver to die during the race since Austrian Josef Gartner, driving a Porsche, in 1986, and the 23rd overall, including fatalities in qualifying for the race.

Simonsen, who listed Le Mans as his favourite circuit on his personal webpage, was born in Odense, and graduated to endurance racing after starting out as a mechanic.

The former Danish Formula Ford champion's last win came in April at Silverstone where he won the GT-AM class in the Aston Martin with Poulsen and Nygaard.