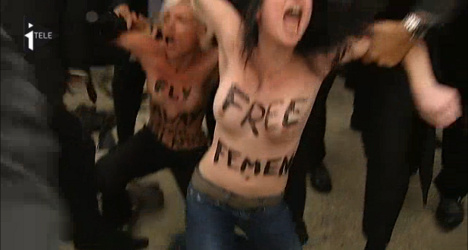 Two members of the Paris based group feminist group bared all and ran towards the president as he went on a walk about during his visit to the air show at Le Bourget to the north of the city.

But the militants were pounced on by Hollande's security guards just as they got within arms reach of the president and forcibly lead away. (see video below)

The pair shouted "Free Femen" in reference to their fellow activists who have been locked up in Tunisia for a similar semi-naked protest.

The slogan 'Fly away from Islam' was painted on the chest of one of the protesters as they also cried out the names of the woman detained in Tunis.

Just as the activists were upsetting the peace at Le Bourget a lawyer for three European activists jailed for four months for baring their breasts in Tunis, said he expected a verdict in their appeal on Friday.

"I expect a decision during the day, after the hearing" which was due to begin at 1030 GMT, Souhaib Bahri told AFP.

He said the three young women, two French and one German, jailed on June 12 for an attack on public morals and indecency, had benefited from an accelerated appeals process. Appeals normally involve a delay of four to six months.

The three women were arrested on May 29 for staging their controversial demonstration outside the central courthouse in Tunis in support of Amina Sboui, a detained Tunisian activist from the same radical women's group.

The air show stunt is just the latest topless protest carried out by Femen's activists, however this is the first time they have ever got close to such a high profile figure.

Earlier this year they caused outrage when they bared all at Notre Dame Cathedral in Paris to bid their own 'adieu' to Pope Benedict.

They also disrupted a far right rally last month and last year caused a minor riot when they disguised themselves as nuns before removing their habits at a gay marriage protest. 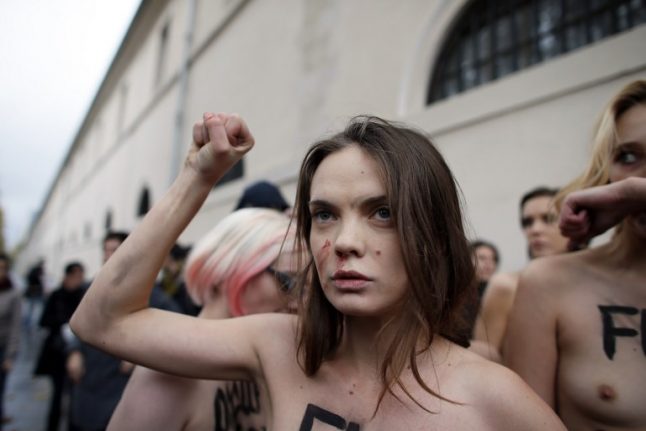