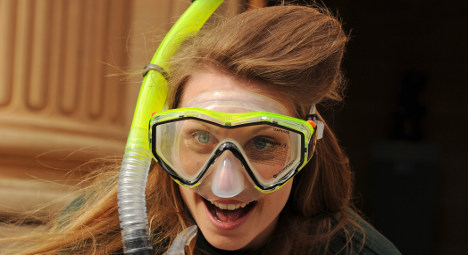 She is a 28-year-old bundle of energy from Paris with a master’s degree in tourism from the Sorbonne University, whose face is all over the French news this week.

And why has a 28-year-old French masters graduate become such hot news?

Well, Detrez has only just gone and beaten 330,000 candidates from 200 different countries across the globe, to land one of the ‘six best jobs in the world’.

Detrez was named this week as one of the six winners of Tourism Australia’s 'Best Jobs in the World' contest on Friday.

She came through probably the stiffest application and interview process that has ever been held to land the role as a park ranger in the Sunshine State of Queensland in north east Australia.

She can be doubly proud of herself, as not only is she the only French winner, but she is also the only woman to be picked out of the six winners.

Detrez will swap Paris for the outback later this year and will pick up a $100,000 salary package for the six-month post.

How did she manage to land the job?

A mixture of the right background, hard work, a little bit of luck, a lot of enthusiasm and running down the famous Champs Elysée avenue in Paris in a swim suit.

First of all, her bid to become a park ranger was helped by the fact that Detrez grew up on a farm in the picturesque Jura region of France.

“I spent 18 years living with cows and now I'm ready for six months with kangaroos,” she says in an endearing French accent in her stand-out promotional video, which no doubt helped to seduce the Australian judges. (see video below)

With 330,000 applicants for  the job, the odds were against Detrez but she pulled out all the stops to make sure she was noticed.

To celebrate getting 1,000 likes on her Facebook page she ran down the Champs Elysée in a swim suit, a stunt that helped her to eventually garner over 3,000 thumbs up on the social networking site.

She also overcame the potential handicap of not having English as a native language by having lunch with Anglo friends as often as possible. And she took the step of visiting Beauval zoo near Lyon to swat up on her knowledge of koala bears.

Detrez is clearly not afraid to take a risk. Despite having just found job in Paris in the tourist industry after months of unemployment, she gave it all up to concentrate on trying to win the big prize.

How did she react to the news?

Well as is the norm these days she took to Facebook.

“My new life begins now! My agenda for the next six months: explore the wonders of the Great Barrier Reef, rainforest, national parks, red earth and more. I love it!!!!,” she declared, no doubt sparking jealous outbursts from the defeated 329, 994 candidates as well as most of the world’s population.

“An opportunity like that will only come around once in my lifetime,” she acknowledged.

Detrez did have the good grace to thank her boyfriend, who helped her with the key promotional video for being  “300%” behind her as well as her family who she described as “angels”.

What will she have to do to earn her money?

Well not much by the sound of things, but that’s probably why it’s the best job in the world.

She will have to monitor and protect animals in the parks and on the beaches of Queensland and is under orders to document her experience through photographs and online articles, which will be used for “promotional purposes”.

After that she'll either return to the queue at a job centre in Paris or, as is more likely, land some other dream job down under.