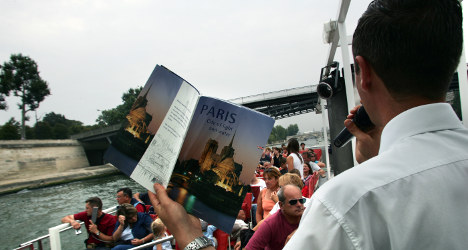 A tourist guide shows a book on Paris during a boat tour of the river Seine in Paris. Photo: Jean Pierre Muller/AFP

Whether it’s taking Americans with a taste for plonk around the vineyards of Burgundy, leading a group of young Australians around the hurly-burly French capital, or a group of art enthusiasts around the Louvre gallery, there are numerous opportunities to work as a tour guide in France.

Given the rewards of the job, however, the competition is stiff but there are various ways to get ahead, and the main one is gaining a respected qualification.

The tour guide industry is strictly regulated by French authorities and if you want to take a group of visitors around a museum or gallery you will need to be a fully licensed guide. That means studying, exams and proving to France's Ministry of Tourism that you are up to scratch.

The system has changed in France in recent months. Whereas there used to be a choice between opting for a national or regional certificate now there is just the 'license professionelle guide conferencier' – a university level diploma which requires going back to the books.

"I would encourage people wanting to establish themselves as a guide in France to take the qualification. It will open up many more opportunities for them and they will be able to work with many travel agencies," she said.

"It will put them ahead of the competition as well as all of the unqualified guides."

“It’s not too difficult to get the qualification,”  she tells The Local.

“Getting selected on to the course is the hardest part. To be selected you have to have some kind of appropriate background, whether it's in tourism, history, art, languages, and so on.

"I did a one year course in Paris and you take an exam and you either get it or you don’t.”

The good thing is, once you get the license, it lasts for life.

You might need more than just English and French

Naturally languages will be one of the key factors in not only being accepted into a course, but also in succeeding in making a living once you're qualified.

Obviously having English is a good start but there are plenty of anglophones as well as French nationals who are quite capable of speaking fluent English.

If you happen to speak Russian, Chinese or any other language, for that matter, you will be at a distinct advantage.

Becharat who is originally from Iran says: “I was selected for the course because I spoke Persian, not English because it was already full of English speakers,” she said.

Is it really necessary?

Oriel Caine, who runs the tour company Paris Walks in the French Capital says the exams can be tricky and are not always the most appropriate.

“One of our guides was asked ‘what was the economic impact of Disneyland on eastern Paris’. That’s no good for someone who has to do a tour of the Louvre is it?” Caine tells The Local.

Caine, who set up Paris Walks back in 1994, believes the tricky questions are designed to eliminate people by making it harder to pass.

She also believes the fact that applicants have to do written exams in French is a way of giving locals an advantage over foreigners.

But Passot-Tomianko from FNGIC says the teaching will help prepare guides for the real thing.

"We are trying to teach group management and techniques for speaking to a group but obviously nothing can replace the experience of doing the job," she said.

It is of course possible to work as a guide without getting the official seal of approval from the French authorities.

For the thousands of others making their living as guides in France, perhaps as freelancers or even for agencies, your chances of succeeding will depend on the range of qualities you possess rather than whether or not you can pass an exam.

Your knowledge of the subject or region must be tip-top if you want to succeed and you can’t trot out the same old lines, says Caine.

“You can’t just repeat the same old clichés and silly myths,” says Caine. “You have to go beyond what people think they already know.

“You need to be a good researcher because you need a good intellectual grasp of what you are talking about. You have to be able to make the subject amusing and fun so being a good orator is necessary,” Caine added.

Guiding a group of 20 knowledge-hungry people or even just an easy-going couple around Mont St Michel or Notre Dame will require all your energy and a good deal of patience.

“It’s a great job, but it’s very tiring. You can work for months without a day’s break. And the days can be long,” Becharat says.

However as Paris Walks guide Oriel Caine says, the rewards are worth it.

"It's a lovely job. You do your research and you learn a lot and you get the pleasure of passing on your knowledge to people," she says.

Watch out for the law

Many resort to making a living as a guide illegally by simply working for tips. It can be a handy way of making money but unless you declare your income you will risk the wrath of the notorious French tax man as well as the officially licensed guides, whose clients you might be pilfering.

“They can make €200 an hour just from tips. They often take the route of real guides and either copy what they say or just make something up. They don’t care if they make mistakes,” Becharat says.

If you are interested in becoming a licensed guide you can visit the website for the Federation Nationale des Guides Interpretes et Conferenciers, which has more details on the different types of qualifications available.

And if you are a tourist, the site also has a list of guides based all over France along with their contact details.