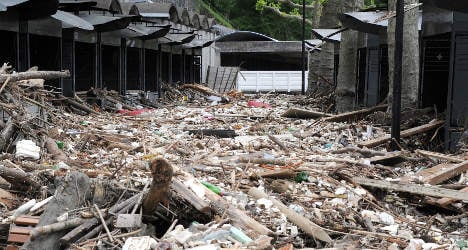 Debris strewn across the sanctuary at Lourdes. Photo: Pascal Pavani/AFP

France's president François Hollande said on Thursday that a state of natural disaster would be declare in the southwest of the country after rampaging floods wreaked devastation across the region and left the Town of Lourdes and its famous Catholic pilgrimage site facing ruin.

Only the Basilica of Our Lady of the Immaculate Conception survived unscathed from the floods that devastated the pilgrimage site in the town of Lourdes.

The shrine's famous grotto was submerged under muddy water while chapels and the bathing pools filled with water many believe has curative powers, were left in ruin, as millions of gallons of flood water rampaged through the town.

Only six months ago the town was hit by similar floods which caused over a million euros worth of damage.

But with snow melt adding to the weight of the flood waters, as the Gave de Pau river burst its banks, this week’s deluge was even more destructive than last October's.

The mayor of Lourdes, Jean-Pierre Artiganav spelled out the impact on the town, describing it as an "economic disaster”.

“Our priority is to reorganize access [to the town] so Lourdes can continue to survive.  But we will need a lot of time for the clean up and to re-establish a communication network.

The clean-up is likely to take months rather than weeks, with further downpours ensuring that water levels remained high on Thursday.

Lourdes is visited by millions of pilgrims each year, meaning the town’s economy is almost entirely dependent on the tourist trade.

But the famous sanctuary, which the Catholic Church has linked to 68 miracles, may never fully recover from the disaster and will remain closed for the foreseeable future.

'We cannot lie about the situation, everything is destroyed'

“It’s catastrophic. We cannot see how we could reopen in acceptable conditions in the weeks to come,” the sanctuary's communications director Mathias Terrier told The Local on Thursday.

“We cannot lie about the situation. Everything is broken, everything is destroyed. We do not know what to do.”

Facing a huge clean-up bill the site has lodged an appeal for charitable donations to help them cover the cost.

“We do not have an exact figure on the cost but it will run into millions of euros,” Terrier said.

“Without help from everyone around the world, there is no way we could open like before.”

The website for Lourdes sanctuary has details of how charitable donations can be made.

With the sanctuaries to remain closed, the knock-on effects for businesses in the town will be also be severe, not least for hotels.

Of the town’s 220 hotels, around 60 were damaged to varying degrees by the floods.

Damaris Stevens who runs the St. Catherine Hotel, had to take refuge on the second floor of her establishment as the flood waters rose.

She told The Local this week that for her the summer season is already over.

“We had only just reopened in April after the floods last year and now will have to remain closed for the foreseeable future.

"It will take a long time for the insurance companies to pay out.  Some people have not been compensated yet after the floods last year.

“The tourist industry has already been hit hard by the current economic climate and no one will have been left unscathed by these floods,” she added.

France's Ecology Minister Delphine Batho told French daily Le Parisien on Thursday that lessons need to be learnt from the floods in order to prevent further disasters in the future.

"I have proposed to the Prime Minister to revise the national plan of adaptation to climate change because it is certain that global warming will only increase the likelihood of this type  phenomenon occurring again in France. We have to be better prepared," the minister said.