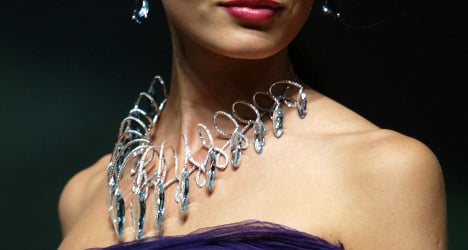 Nijan Drobnjak had been on the run after fleeing Germany, where he had been sentenced to a seven and a half year prison term for armed robbery and kidnapping.

He was captured by police on Tuesday and is expected to be swiftly extradited back to Germany, which has issued a European arrest warrant for him, police said.

The Pink Panthers are a gang who emerged from the conflict in the former Yugoslavia to become the most successful jewel thieves in the world.

According to Interpol, they have, since 1999, snatched jewels with a value in excess of €330 million in heists which are often executed with breathtaking speed and precision and frequently finish with the thieves making a clean getaway.

They were believed to have been behind two high profile robberies of jewellery at this year's Cannes Film Festival.

They gained their nickname with a raid on a London branch of Graff Diamonds in 2003, in which two of them posed as wealthy would-be customers, persuading staff to open doors for them before helping themselves to diamonds worth millions of dollars.

Although one of the robbers was overpowered at the scene and another one later arrested, only a fraction of the diamonds were recovered, one of them hidden in a pot of face cream.

That was reminiscent of a scene from the 1975 film "The Return of the Pink Panther" and resulted in a nickname that the gang themselves adopted, wearing pink shirts for a subsequent raid in Zurich.

The gang, which is believed to be based in Montenegro and largely made up of thieves from all over the former Yugoslavia, was also responsible for the 2004 theft in Tokyo of the Comtesse de Vendome, a 116-diamond necklace.

In that raid, staff had tear gas sprayed in their eyes and the thieves got away on bicycles.

In Dubai in 2007, members of the gang drove stolen cars through the doors of a shopping mall and snatched their loot in full view of terrified staff and shoppers before escaping in a waiting getaway car.

Despite these spectacular successes, Interpol believes the gang has been weakened in recent years by the arrest of a number of its leading members.