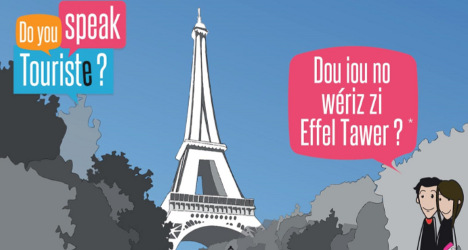 "Do you know where is the Eiffel Tower?" A new campaign hopes to teach tourism professionals in Pairs how to understand their international clients. Photo: CCI/CRT

Rude guides, miserable waiters, unhelpful shop staff – these are just a few of the complaints visitors to Paris often make about the city. And it seems tourism chiefs have finally got the message.

In future visitors may find themselves more welcome, more at home, and better understood in the French capital thanks to a new manual that will be handed out to those who work in the tourism industry or who come into regular contact with visitors.

The “Do you speak touriste?” campaign, run jointly by the Paris Chamber of Commerce (CCI) and the regional tourism committee (CRT), was launched on Tuesday.

It consists of a manual, which is being sent out to 30,000 tourism industry professionals, as well as a website, www.doyouspeaktouriste.fr

“The aim of this campaign is to focus on the quality of welcome that visitors receive in Paris, and to train professionals here to understand the differences between them,” François Naverro from the CRT, told The Local on Wednesday.

While Naverro claimed that “although 30 million tourists come here every year, and 96 percent of them say they are satisfied, our goal is to improve their experience even more.”

Part of that, he says, is teaching restaurant-owners, museum staff, and shopkeepers to understand the important cultural differences between various nationalities.

“For example, we know that 32 percent of British tourists, who are our first and most important international clients, come here in couples.

“They stay on average for three and a half nights, and they spend an average of €145 each day. They love architecture, they especially want to have fun, breakfast for them is usually between 7.30 and 8.30 am, and lunch is from 12 to 1pm,” he says.

“This can be very strange for local restaurant-owners, because we French like to start lunch at 1pm, and take our time with it,” he added.

The campaign website, which refers to ‘the English’, rather than ‘the British,’ mentions that they expect; “Smiling, friendly staff, a warm welcome, and a playful dimension to cultural attractions.”

The Americans, by contrast, expect “to be taken care of quickly, and a mastery of English,” among other needs.

For his part, Naverro said that visitors from the US are more demanding than their British counterparts, and expect a kind of “full service.”

“This is because, on average, they are wealthier, spend more for their trip, and stay for 6.7 nights in Paris.”

“London, on the other hand, is more like a suburb of Paris.”

“American tourists can be frustrated sometimes by cultural and technological differences. For example, they expect their hotel to have widespread Wi-Fi, and they usually have dinner at 6pm, which is very early for France,” he added.

The new initiative comes at a delicate time for Paris’s image as a tourist-friendly city.

In May, The Local reported how local tourism officials were forced to play down the significance of a riot near the Eiffel Tower and Champs Elysées, during which a bus full of tourists was attacked by a group of looting football fans.