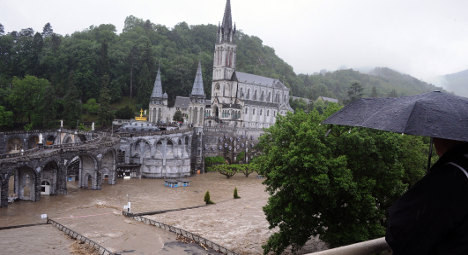 The Catholic shrine of Lourdes, Haute-Pyrénées under 1.4 metres of water after severe flooding in south-western France, which claimed its victim in the early hours of Wednesday. Photo: P. Pavani/AFP

A 75-year-old man was swept to his death after the flood waters at Luz-Saint-Sauveur in the Pyrenees turned a local stream into a torrent.

That tragedy followed the death of a woman in her 70s who drowned overnight on Tuesday after becoming trapped in her car as it was swept away by severe flooding in the town of Pierrefitte-Nestalas, Haute-Pyrénées.

The victim and another man were swept away in a vehicle when the Gave de Pau river burst its banks.

She and her husband had been evacuated from their home but were heading back to collect personal effects when they were trapped by the water. Her husband was rescued by firefighters.

Emergency services were able to rescue the man, who had managed to escape from the car, but could not revive the elderly woman when they reached her.

Two departments at the foot of the Pyrénées mountains in south-western France – Hautes-Pyrénées and Pyrénées-Atlantiques –were placed on red alert for continued flooding until on Wednesday. Across the country as a whole 43 departments were placed on alert as fierce storms lashed regions including Paris and the north east.

The shrine at Lourdes, where the Virgin Mary reportedly appeared to a peasant girl in 1858 and whose water many believe has curative powers, remained closed on Wednesday.

Tourists in the town were relocated from hotels bordering the Gave de Pau to an area on higher ground.

One hotel owner in the town told The Local the area was like a scene from a disaster movie.

"There's trees and debris strewn everywhere, the car park has been turned into a river and people are getting piggy backed out," said Damaris Stevens from the St Catherine hotel.

"I was up to my chest in water when I returned to the hotel. The water has come into the dining room, all the hotels are affected. We had only just reopened in April after the floods in October.

"There was a lot of panic when the waters were rising. We took the decision to move to the second floor. The fireman asked us to leave but I refused

"No one has escaped unscathed."

Minister's from the French government are expected to visit the scene later on Tuesday.

The Catholic shrine was evacuated on Tuesday afternoon as the pilgrimage site was left under 1.4 metres of flood-water.

Hundreds of residents, pilgrims and tourists were housed in local hotels overnight, and 3,500 households were without electricity on Tuesday evening.

A spokesman for Lourdes sanctuary Mathias Terrier told The Local that the floods posed a greater threat to the shrine than those of October last year, which caused widespread damage.

"It's very serious, the water is still rising. There is nothing we can do. We just have to wait and cross our fingers and hope," he said.

This video, published on Tuesday, shows the Gave de Pau river bursting its banks as it rages through the town of Soulom, Hautes-Pyrénées.