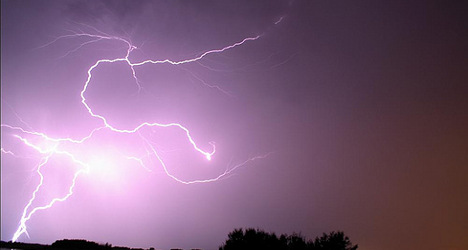 Météo France, the country’s weather service place 11 departments in the south west and west of France on Orange alert on Tuesday, with heavy rain and storms expected to hit the region.

It comes a day after Paris and the south west of France were hit by storms, which were accompanied by gales, hail storms, downpours and fork lightning.

Residents in those departments can expect similar violent storms to those seen in Paris on Monday.

Fire fighters in the French capital were bombarded with around 1,200 emergency calls, mostly concerning flooding caused by the downpours of fires sparked by the lightning.

The storms, the likes of which are more akin to the tropics than western Europe, caused widespread damage in the department of Touraine in central France, which had not been placed on Orange Alert on Monday.

Particularly affected were vineyard owners in the Vouvray who saw several hectares of vines ruined in just  a matter of minutes by hailstones, the size of ping pong balls.