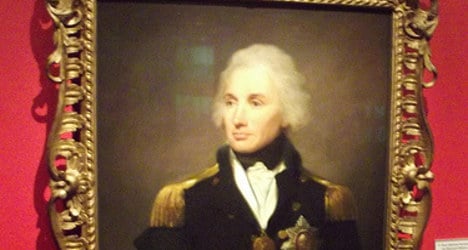 French bashing has been a pastime for many British politicians and statesmen over the years, but not many would go as far as Admiral Lord Nelson.

The famous British naval war hero, a statue of whom stands proudly above Trafalgar Square, was well known for his hatred of the French, but a letter penned by the admiral in 1799 has revealed the true extent of his loathing.

In the four-page tirade, which was auctioned off in London for £9,000 this week, Nelson launched the most xenophobic of outbursts against his arch enemies from across the Channel.

Nelson’s anger may be partly explained by the fact he wrote the letter in the aftermath of the Battle of the Nile, where the Royal Navy defeated French Emperor Napoleon’s fleet off Egypt.

Nelson says the French are a nation of “thieves, murderers, oppressors and infidels”.

He also attacks France's republican system for being a "many-headed monster" and stated their problems would only be resolved if they had a monarchy.

An extended extract from the letter reads: “I hate rebels, I hate traitors, I hate tyranny come from where it will.

"I have seen much of the world, and I have learnt from experience to hate and detest republics.

"There is nothing but tyranny and oppression, I have never known a good act done by a Republican, it is contrary to his character under the mask of Liberty.

"He is a tyrant, a many-headed monster that devours your happiness and property.

"Nothing is free from this monster's grasp. A republic has no affection for its subjects.

"A King may be ill advised and act wrong, a Republic never acts right, for a knot of villains support each other, and together they do what no single person dare attempt.

"I pray God this war was over and a monarch placed on the throne of France, not that I like any Frenchman be he royalist or be he republican, but the French republicans have shown themselves such villains.

"I form not my opinion My Dear Lord from others, no it is from what I have seen.

"They are thieves, murderers, oppressors and infidels, therefore what faith can we hold with these people."

Thankfully, Nelson was never tasked with having to negotiate the EU budget.