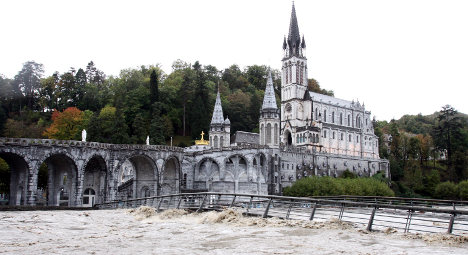 French authorities on Tuesday shut the sanctuary ringing the cave at Lourdes, whose spring water many Catholics believe can miraculously cure illness, and evacuated about 200 people after flash floods.

A spokesman for Lourdes sanctuary Mathias Terrier told The Local on Tuesday that the situation was extremely worrying and was likely to get worse in the hours to come.

Terrier said the floods posed a greater threat to the shrine than those of October last year that caused widespread damage.

"It's very serious, the water is still rising. There is nothing we can do. We just have to wait and cross our fingers and hope," he said.

"We have taken preventative measures to evacuate everyone. At the moment we are most concerned with trying to rehouse people and once that is done we will look at any damage caused. People are the priority at the moment.

Terrier confirmed the sanctuary would remain closed on Wednesday but there would be a mass held at the Basilica of Our Lady of Immaculate Conception, which is safely out of reach of the flood waters.

He also told AFP that the Gave de Pau river was flowing at 3.50 metres (11 feet) above its normal level, adding that there was already 1.40 metres of water in the cave.

The preventive measure to evacuate the shrine on Tuesday came a day after heavy rain and even some snowfall in the area led to rivers flowing well above their normal levels, even cutting off some roads.

"The Sanctuaries are closed apart from the Upper Basilica," or a Gothic church above the grotto, the local prefecture of the Haute-Garonne area said in a statement.

"We are very vigilant, although for the present the situation is not catastrophic."

Local officials said most of the 200 people moved were those camping in the area.

The video below from French TV station TF1 shows how high the waters have risen.

In 2012, the Lourdes shrines were closed after flash floods that caused hundreds of thousands of euros in damage.

Thousands of pilgrims come to the famous grotto where the Virgin Mary reportedly appeared to a peasant girl in 1858 and whose water many believe has curative powers.

The floods come as France's meteorological service Météo France placed the department of Haute-Pyrénées on "red alert" after torrential rain.

The highest warning level was imposed on Tuesday afternoon due to the threat of the type of flash floods that hit Lourdes.

A red alert means residents in the area need to have "absolute vigilance" because of the dangers posed by the severe weather.

They are advised to keep up-to-date with the situation as much as possible.

Eleven other departments in the south and west remain on Orange alert due to the stormy weather.