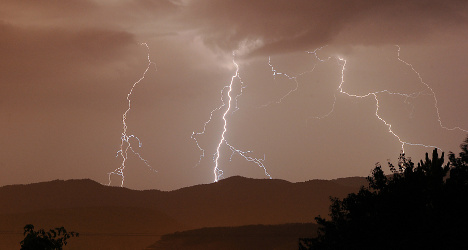 The south west of France remained on alert on Monday afternoon with storm warnings in place over much of the region. Five departments in the north and west of France including Calvados in Normandy were also placed on alert as the country's weather service Météo France said the tempests were heading that way.

In all sixteen departments (11 in the south west) were placed on Orange alert, due to the storms.

In a statement put out on Monday afternoon Météo France said "the storms would be accompanied by showers of hail stones, downpours and lightning". Up to 100mm of rainfall is forecast for parts of the Pyrénées region of the south west.

Météo France said there was a severe risk of flooding with the warm temperatures bringing about rapid snow melt at higher altitude.

Earlier on Monday fork lightning had lit up the dark skies above Paris as the region on storm alert.

In all, 19 departments in the Ile De France region and south-western France were put on Orange alert for storms, with winds of up to 80kmh expected as well as hail showers.

In a statement Météo France said the storms will be brief but “very violent locally with a risk of gales and hail stones”.

Météo France say torrential downpours could cause buildings and cellars to flood.

Earlier on Monday hail storms also hit the town of Tours to the South West of Paris where hail stones, some the size of eggs, were reported to have caused damage. The storms left around 13,000 households without power in the region.

This image of a hailstone "the size of a ping-pong ball" was taken in Fontenay Le Comte, western France at 4.30 am on Monday.

French daily Le Parisien reported that fire fighters were called out around 200 times as trees were uprooted, basements were flooded and roofs left damaged in the storms.

This image, captured in the 19th arrondissement of the capital, shows some of the heavy cloud cover Parisians witnessed during the storms.

At one point on Monday morning, the skies above Paris resembled a winter's evening, rather than a summer morning, as shown in this picture, also taken in the 19th arrondissement of the capital.

This video, uploaded to Youtube during mid-morning on Monday, shows a spectacular hail storm at Chelles, in the suburbs of Paris.

Send us your pictures of the storm to [email protected]