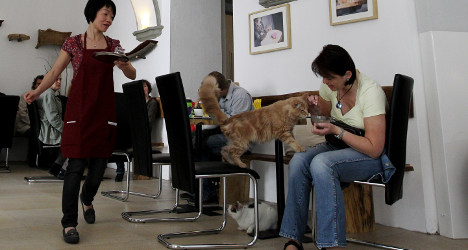 A customer at Neko Cafe in Vienna, Austria, pets of one of the establishment's resident cats, while enjoying a drink. Plans for a similar café in Paris have raised concerns. Photo: Alexander Klein/AFP

Margaux Gandelon is the 26-year-old Parisian cat lover hoping to bring the ‘bar à chats’ (cat café) concept to France as early as September, but her project has met opposition from a few different quarters.

The cat café craze, which started in Taiwan and became popular in Japan, involves clients paying a fee to play with, watch and pet feline friends, for a certain amount of time.

“This will be a friendly and calm place. Customers will be able to caress the animals while having a cup of tea or a coffee,” Gandelon told AFP.

However, the plan has drawn opposition from some French animal rights activists, among Christophe Marie from the Bardot Foundation in Paris.

“I don’t really appreciate the animal being relegated  to the status of an object,” he told AFP.

“What really makes me uncomfortable about this initiative is that the animal would be reduced to being a teddy bear.”

“Cats don’t have a particularly strong desire to be petted by the customers of a café,” he added, noting that he hoped there wouldn’t be more such establishments in the future.

For Reha Hutin president of the ’30 million friends foundation’, the concern was more a question of “what will these cats get up to, and in what sorts of conditions, outside opening hours?”

For her part, Gandelon acknowledged the concerns of critics, but vowed that the cats' will be respected at all times.

"They will only get petted if they so desire. It won't be like in Japan, where you reserve the use of a cat to cuddle for an hour," she assured AFP.

Despite the opposition, Gandelon’s concept has its supporters as well.

Jean-Yves Gauchet, a vet in the south-western city of Toulouse, sees no harm to the cats, and a significant function in filling a relaxing space with furry companions.

“The cat is an eternal baby. It loves being cuddled, and only wants to play. Also, they can fill an emotional gap for some people who don’t have children,” he said, adding that cats were like “medication without any side effects.”

“A cat is a stress-fighter. It brings down blood pressure, and keeps us focused on the here and now. If people respect their independent nature, and let them walk away when they want to, everything should go fine,” she said.

Gandelon says she has already obtained the permits and raised the €40,000 she needs to open up France’s very first cat café in the Marais neighbourhood of Paris in September.