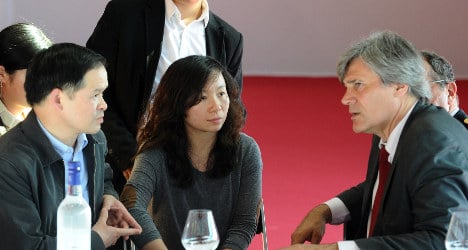 French Agriculture Minister Stephane Le Foll (R) speaks with a delegation from the Chinese Embassy at the Vinexpo wine fair in Bordeaux after Chinese students were attacked. Photo: Nicolas Tucat/AFP

China has urged the French government to take action to protect its citizens in France after six students were beat up in an apparent racially motivated attack, the foreign ministry in Beijing said on Monday.

"So far, the injured student has been properly treated," Hua said at a regular briefing.

"At the same time China launched representation to France, asking it to properly handle the case, bring the perpetrators to justice and take effective measures to protect Chinese citizens' safety and rights in France."

Three youths, aged 19 and 20, were charged on Sunday with "acts of violence" with three aggravating factors: using or threatening to use a weapon, being drunk, and discrimination linked to race.

Racist insults were hurled during the assault early Saturday in which a female student was seriously hurt in the face by a glass bottle that was thrown at her, Le Foll said. She was hospitalized and underwent surgery.

On Sunday Agriculture Minister Stephane Le Foll said that France's image had taken a hit following an attack on six Chinese students as the Chinese embassy in Paris strongly condemned the attack.

Two representatives from the Chinese embassy in Paris have come to Bordeaux met with Le Foll later on Sunday after the attack on the oenology students in the wine-producing Bordeaux region, officials said.

"It's an unspeakable act," Le Foll said, speaking at the inauguration of the Vinexpo in Bordeaux, one of the world's biggest wine fairs.

China is the third biggest market for French wines.

"It's the image of France which has been dented with these xenophobic attitudes," Le Foll added.

The Chinese embassy said Sunday that it "strongly condemns" the assault, adding: "We ask relevant authorities in France to investigate the case swiftly, to bring the perpetrators to justice, and take relevant action to ensure the safety of Chinese students."

"The Chinese government's relevant departments and Chinese embassy in France are paying close attention to this case," it said.

Three of the alleged attackers have been detained and are now in police custody.

The students were attacked at their home in Hostens, a small village of 1,300 inhabitants about 50 kilometres (30 miles) south of Bordeaux in southwest France.

Concern has grown in China in recent months over the increasing number of thefts and attacks targeting Chinese tourists. In March, a group of 23 Chinese tourists were robbed in a restaurant shortly after they landed at Paris airport.

In the Bordeaux region, many locals have looked on with dismay as Chinese investors have begun buying up vineyards.

French winemakers have recently also sounded the alarm over an anti-dumping probe launched by Beijing into wine imports from the European Union, in an apparent retaliation act over Brussels' decision to slap tariffs on Chinese solar panel imports.

Separately on Monday, expat website Shanghaiist reported that a French tourist, named only as Thomas, had been badly beaten by a group of local men in the Chinese city of Shanghai, in an attack which was uploaded to Youtube.

The victim was left needing stitches for an open head wound after been dragged from a taxi, punched and kicked by seven assailants when leaving a bar with his girlfriend in the early hours of June 10th.

The following video of the attack on Thomas, features violence and some swearing, and might be disturbing to some readers.