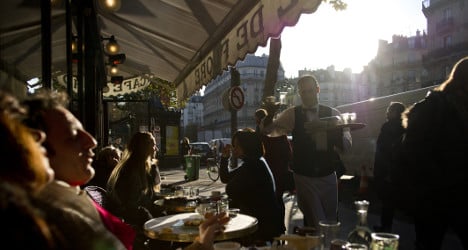 A diner enjoys a cigarette with his coffee in a open terrace outside a café in Paris. A French court has banned smoking in entirely closed off terraces. Photo: Fred Dufour/AFP

“The [open] terrace of an establishment that welcomes the public is not a closed and covered space where the total ban on smoking applies," said the court on Friday.

A statement from DNR said the group was “rejoicing” at what it saw as the closing of “a loophole in the smoking ban.”

Since the ban on smoking in enclosed public places came into effect in 2008 bar-owners and restaurateurs in France had begun constructing outdoor terraces, often enclosed by canvas or even glass screens, to allow clients to smoke at a table, sheltered from the elements.

However not everyone was happy with the ruing.

One of those previously happy customers reacted angrily to the court's judgement, labeling it “scandalous.”

Antoine, who frequents the Indiana Café in the Montmartre neighbourhood of Paris – one of the bars targeted by DNR’s lawsuit – explained his disgust to France’s BFMTV.

“Customers have the whole of the inside of the restaurant as a non-smoking area in the winter. If I can’t smoke outside, I definitely won’t come here as often,” he added.