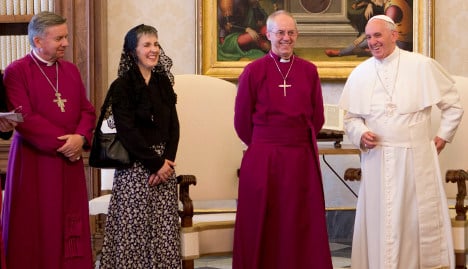 "Your role… consists in proposing laws, amending them or even repealing them," the pontiff told a delegation of MPs from France, adding that it is "necessary… to inject them with something more, a spirit, a soul which does not just reflect fashions and ideas of the time."

The laws should "provide the indispensable quality which raises and ennobles the human person," the 76-year-old said.

On Friday, Francis praised the head of the Anglican Church, Justin Welby, for his stance against gay marriage.

Francis urged Welby to continue proclaiming "the importance of the institution of the family built on marriage, a value that you yourself have had occasion to recall recently."

France, which celebrated its first official gay marriage at the end of May after months of sometimes violent protests, "is a nation towards which the eyes of the world often turn," he told the lawmakers.

"The lay principle which governs relations between the French state and various religious faiths should not in itself mean a hostility to religious reality, or an exclusion of religions from the social arena and the debates which animate it," the pontiff said.

The Argentine said the Church "wants to make a specific contribution to the deep questions which lie behind a more complete vision of the person and his destiny."

It hopes to make such a contribution not only on "anthropological or societal" issues but also "in political, economic and cultural domains," he said.